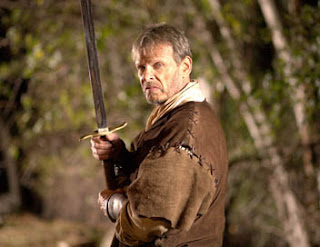 I was sick yesterday, and at home away from work. When you're sick you sometimes do weird things. I often undertake binge viewing of Friends, for example. Yesterday, however, I found myself watching the fantasy film Dragonquest. I knew it was going to be cheap and awful going in. I knew I had hundreds of films on the shelf that I could have watched that would have been better made, better performed and written with some vague semblance of competence. What can I say? When you're sick, you sometimes do weird things.

Dragonquest is a 2009 direct-to-DVD fantasy film, directed by Mark Atkins and produced by the Asylum. The Asylum are a very odd production house whose output primarily consists of vaguely disguised rip-offs of big budget Hollywood blockbusters. They move from development to release in the space of four months, spending less than a million dollars per film. They make absolute trash, but occasionally watchable trash. Dragonquest definitely falls into the "watchable trash" category, but don't be under any illusions if you follow my lead and watch this: this is not a good movie. 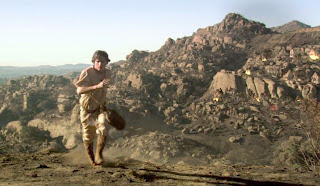 The plot: there's a farmboy who's actually a prophesised saviour, who must travel the land proving his worth and collecting magical gems until he has enough to defeat a dragon that's been raised from the underworld by an evil warlord. On his travels he is accompanied by an old swordsman and a young freedom fighter. It's basically a cliche wrapped in a stereotype and then liberally coated with predictableness. Witty dialogue could save it - it doesn't have any.

There's been an attempt to lift the film's profile with stunt casting: Jason Connery (son of Sean, star of Robin of Sherwood) plays a supporting role. Brian Thompson (craggy faced actor from The X Files, The Terminator, Alien Nation and Cobra) plays the villain. Marc Singer (Beastmaster, V) plays the aforementioned old swordsman. To his credit, Singer actually has some fun with the role and is easily the most watchable thing here. Actually he's the only watchable thing here. He's basically playing the role as a live-action Yoda. It's a stunningly over-the-top performance, made by a competent actor plainly aware he's in a piece of shit and having a ball mugging for the camera.

Dragonquest is a terrible film. I feel the need to re-interate that one final time. It is not a good movie, it is not well made, and for the most part the cast are not doing anything particularly interesting. At the same time, I can't deny that I enjoyed myself watching it. Sometimes it's fun to wallow in the sewer with a bad movie. It helps make us realise how good a lot of other films actually are. It helps to reset our perspective when we're at risk of exaggerating how bad Hollywood's productions are.
Posted by Grant at 9:49 AM