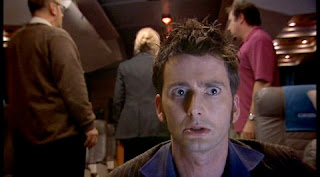 Who50 counts down to the 50th anniversary of Doctor Who by reviewing my favourite episodes and serials over the history of the programme, counting down from #50 to #1. Today, #14: "Midnight", a 2008 episode written by Russell T. Davies and directed by Alice Troughton.

When Doctor Who returned to British television in 2005 it was under the energetic leadership of executive producer and head writer Russell T. Davies. I remember being tremendously excited, not simply because my favourite TV series was coming back but also because it was Davies who was writing it. Through edgy dramas like Queer as Folk and The Second Coming he had established himself as one of Britain's strongest television writers - arguably that country's best since the late Dennis Potter.

Then when the series finally started, it was a shock to discover that - generally speaking - the series' finest episodes weren't by Davies at all. The better episodes were the ones by Steven Moffat, like "Blink" and "The Girl in the Fireplace", or by Matt Jones, like "The Impossible Planet", or Robert Shearman with "Dalek". All Davies seemed to be providing were overblown misfires like "Aliens in London" or ridiculous season finales like "The Last of the Time Lords" and "Army of Ghosts".

"Midnight" is astonishing simply, and profoundly effective. The Doctor takes a trip on a shuttle to see a cascade of sapphires on an alien planet (he leaves his companion, Donna Noble, at a holiday resort). On the way the shuttle breaks down. Something begins to bang on the shuttle from the outside. Then something invisible gets inside. For here on in "Midnight" is a horror story, with a small cast of characters trapped inside a room with something unknowable and dangerous. It's a claustrophobic, dialogue-heavy thriller, rich in character and wonderfully original. Even the Doctor seems frightened by what's going on.

The episode is reliant almost entirely on its characters, so it's a relief that director Alice Troughton (no relation to the actor Patrick Troughton) casts it with such strong and engaging performers. The main guest star is Leslie Sharp, who had previously starred in both Bob and Rose and The Second Coming for Davies. She delivers a great performance as the episode's de-facto companion Sky. Also of note is David Troughton (definitely a relation to his father, actor Patrick Troughton) as Professor Hobbes.

This episode is pretty much the one time in Russell T. Davies' tenure on Doctor Who that we get to see the 'old' Davies writing for the series. In almost every other episode he's deliberately writing to a bigger, brighter register than his previous work demonstrated. It's the best thing he wrote for the series in his five years, and one of the best things anyone's written for the series ever.
Posted by Grant at 10:53 PM