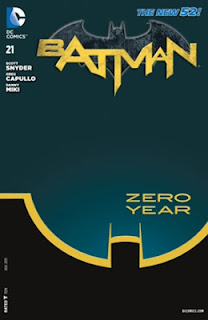 The Batman books are the powerhouse of DC's comic book publishing efforts, and that is nowhere more apparent than in Batman itself. Under the creative guidance of Scott Snyder and Greg Capullo it has overtaken Justice League to become the effective flagship of the entire New 52. June 2013 saw the launch of its third major story arc, "Zero Year", and a corresponding 10% bump in sales compared to May's relatively self-contained issue. Batman shipped 9% more copies in June 2013 than in June 2012, which is an extraordinary feat in an industry where each issue generally sells less than the one before it.

Detective Comics, on the other hand, is still suffering from a fairly weak start by writer/artist Tony Daniel. I think that it's lost a lot of goodwill from readers, which is a shame because John Layman and Jason Fabok are doing some great work here. Sales are down 17% compared to May, where Layman and Fabok's first arc wound up: sadly it looks like about 8,000 readers were waiting for a chance to jump ship.
Batman and Robin is down 7% compared to May, and 9% since June 2012. Since the death of Damian Wayne I think this book has floundered a little: the individual issues have been good - in some cases great - but there's a lot of uncertainty hanging over the title. Is a new Robin coming? When will he/she arrive? Once those questions are answered (maybe at Comicon) I think sales on this book will bounce back.

Batman: The Dark Knight is the poorest-performing of Batman's own titles, and I don't think that's a surprise: it has the weakest hook of the four books (what is it for?), and has struggled with poor scripts over the past two years. While sales in June only dropped 4% from May 2013, sales since June 2012 have declined by 32% - the only Bat-book to do worse was Batwing. 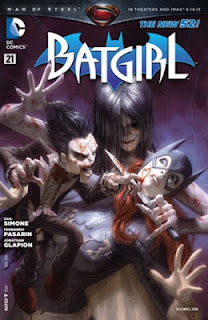 Nightwing and Batgirl generally sell quite closely to each other; Nightwing is the most popular book but there isn't really a lot in it. Both have declined by only 14% over the past year. Certainly they're doing much better than Supergirl and Superboy, which we'll discuss later. Another two books that seem quite closely linked in terms of sales are Catwoman and Batwoman - although in terms of content they're poles apart.

Red Hood and the Outlaws certainly has a fairly loyal audience. I can't stand the book personally, but its sales have declined by only 12% over the past year. Less successful is Birds of Prey: issue #21 only shipped 20,767 copies. At its rate of descent I don't see it surviving the next 12 months without significant retooling. I do wonder if its biggest problem is the missing cast: Huntress is now over in Worlds' Finest and Oracle no longer exists.

Talon is now nine issues in, and sales have dropped 60% to 21,755 with issue #9. I honestly don't see this book surviving. It's incredibly difficult to launch a new superhero, and it's guaranteed this book will run to at least 12 issues - DC can't be too unhappy with that.

Quite how Batwing continues to survive, however, is beyond me. Sales are down 40% compared to June 2012, and even from issue #20 to #21 sales have dropped 7%. The relaunch of this title with new writers and artist and a new protagonist scored Batwing 1,500 new readers: they've almost all dissipated already. I had this book pegged to end in August or October, but DC still haven't announced its cancellation. It's only a matter of time, though.