Under the Dome: "Outbreak" 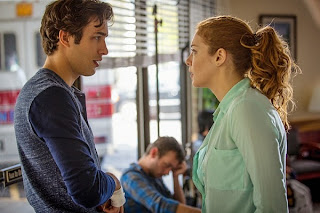 Tensions heat up within the dome as the US military move out. Then, one by one, the townspeople begin to succumb to a mysterious illness. The hospital is short on antibiotics, and someone has raided the town's only pharmacy.

There's a bit of a bounce-back in "Outbreak", returning the show back to the quality demonstrated in its first two episodes. Don't get me wrong - I think that Under the Dome remains a relatively clunky and awkward series, but this week it was significantly more watchable and certainly a lot more enjoyable. It's funny that this series is being produced for CBS because, all things considered, it resembles pretty much exactly a late 1990s drama from Fox. There may be a continuing storyline, but each episode pretty much has its own self-contained and neatly concluded plot. This week it's a meningitis outbreak that appears to appear, manifest and go away in the space of a day. Sure it was entertaining, but it is kind of ridiculous.

Several of those ongoing narratives get pretty significant breakthroughs this week. Julia learns critical information about Barbie, and their relationship changes. Big Jim and Father Coggins are divided. Junior Rennie gets a commission to join the police force, which can only end badly. I actually like what they did with Junior this week. Since the pilot I've been highly ambivalent about the character, who felt like he'd walked out of a completely different, one-dimensional show. This week he actually gets some much-needed depth and nuance.

The episode's best moment, and one of the creepiest things I've seen on television in ages, was Joe and Norrie's attempt to recreate their earlier seizure. I won't spoil what happens when they review video footage of the incident, but it really did send a chill down my spine.

That makes three worthwhile episodes out of four so far, and gives Under the Dome a current score of 75%.
Posted by Grant at 9:13 AM