Under the Dome: "Blue on Blue" 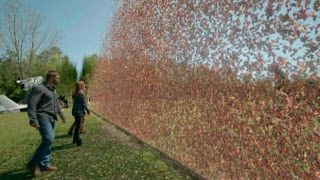 The military has returned to the dome, bringing with them friends and family of those trapped inside. While the people of Chester's Mill enjoy their reunions, something else seems to be afoot. Meanwhile, Father Coggins goes off the deep end, Big Jim tries to work out what to do about his son holding Angie prisoner, and Norrie receives an unexpected piece of news about her past.

And it's all terrible. This is an utterly awful hour of television, packed with soap opera-style storylines, narrative twists so obvious they're visible from orbit and cringe-worthy dialogue that made me want to flee the room. What's particularly perplexing is that this episode is written by Brian K. Vaughan, whose comic book work on Y: The Last Man, Saga and Ex Machina demonstrates that he should be way, way better than this. I'm not entirely certain of what went wrong.

Of course the military have brought the friends and family in not to catch up, but to be able to say their goodbyes, as they're launching a tactical missile strike at 13:15 (that's military time for 1:15pm, in case you didn't know - apparently Vaughan doesn't think you do know this, since he has Barbie explain it to supposedly intelligent adult characters). It is obvious two minutes into the episode that this is what's going to happen, and it's also obvious that the strike isn't going to work, since we're only at week five of a 13-week season.

We've sadly also hit the stage where the characters start mentioning how long they've been trapped under the dome - only this series is still running at a precise rate of one day per episode, so they've actually been trapped there for less than a week. This is a problem I remember Lost running into in its first season as well, and it's always an irritating problem to have to sit through. Also remember half of the cast were dying of meningitis about 12 hours earlier - they all bounced back so well.

I have no idea where the Angie/Junior Rennie storyline is going. It takes Big Jim most of a day to release Angie after finding her, and by the episode's conclusion she's cradling Junior's head in her lap while he threatens her with a semi-automatic handgun. It's difficult to see what's happening next with this plot thread, which is a relief I suppose since the rest of the episode was so obvious. Certainly there's one line of dialogue about five minutes in which guarantees that the character saying it won't survive the hour, and it's a beautiful staged moment of horror when they do indeed bite it.

I also liked the butterflies, which were a nice piece of creepy visual imagery.

At this stage, with five hours behind us, I think it's fair to say that Under the Dome is not going to be remembered as a television classic, assuming its remembered much at all. It's just kind of there; an entertaining diversion when it works, and disposable rubbish when it doesn't. This week it definitely doesn't. That's three watchable episodes out of five so far, and a running score of 60%.
Posted by Grant at 9:28 AM