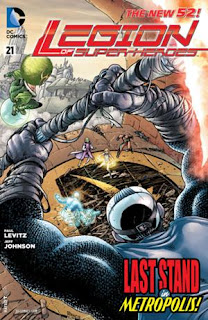 Of all the lines in the New 52, it's the Young Justice books that have suffered the most cancellations. A full five monthly titles have been cancelled since September 2011: Blue Beetle, Legion Lost, Hawk and Dove, Static Shock and Ravagers, and Legion of Super-Heroes is winding up in August. Two new monthlies - The Movement and The Green Team: Teen Trillionaires - are not looking very healthy either.

Teen Titans may be performing best out of the four, but let's not pretend it's performing well. The book's readership has declined by more than a quarter in the past year, and it's now selling less copies per month than it did before the New 52 hit. This is a very strong franchise for DC, particularly given it's the only place to see the massively popular Tim Drake, so in all fairness this book should be selling 50,000 copies a month.

The Movement lost 38% of its readers from its first issue, which given where it started means the clock is ticking on its chances. This has all the hallmarks of another eight-issue misfire, as does The Green Team - which went even less well, with a 48% drop to less than 15,000 copies. Not promising at all.

Legion of Super-Heroes has been bleeding readers since day one of the new 52. It's now slipped below the deadly 15,000 copy mark with a 3% fall since May. It's now cancelled, with two more issues to go. I think the Legion is a really tricky franchise to get right, because it's structurally designed to have a massive extended cast and a rich backstory. These are exactly the kinds of things that can keep new readers away. It's too valuable a piece of IP for DC to discard forever, but I hope they find the perfect writer and a decent artist (Scott Kolins has not impressed me one bit) to give them a better chance next time.