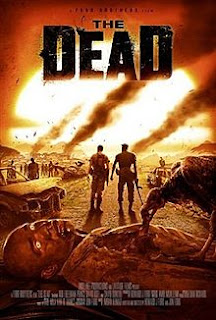 US army mechanic Brian Murphy wakes up on a beach in West Africa, having survived a plane crash. The country is in chaos. It's everyone for themselves - and the dead are walking the African wilderness. The Dead is a 2010 horror movie written and directed by Jon and Howard J. Ford, in which the zombie apocalypse comes not in American suburbia, but in the middle of Africa. It's an incredibly clever film, because it takes a very well-worn sub-genre of horror - the zombie movie - and applies it to an intriguing and distinctive setting.

There's been a trend in recent years to have film zombies break into a run, pretty much started by Danny Boyle in 28 Days Later, and that's a trend that The Dead refreshingly avoids. Instead it uses the shambling, stumbling breed of zombie, and uses that to tremendous effect. When Murphy is desperately trying to put a wheel back onto a jeep, and you can see the dead shuffling towards him in the background, it's about as tense as anything I've seen in a horror movie in recent years.

Of course there's an elephant in the room here, in that this is ultimately a horror movie about a white man being hunted down by a horde of Africans who want to eat him. There's something more than a litle uncomfortable about that, despite a lot of work clearly being done to emphasise the damage that the Americans and other citizens of the developed world have done to West Africa. There are very positive and pro-active African characters in this movie, which is fantastic, and the setting gives the film a really fresh basis on which to build a zombie movie, but the ultimate thrust of it can't be written away: this is a film about an educated, clever white man on the run from mindless, cannibalistic Africans. I still don't quite know what I think about that.

If you move past this issue though, at least the best you can, this is a slickly shot traditional horror movie given fresh life via a new setting and a new angle. How many films do you see set in Africa? How many horror movies manage to generate tension and scares in full daylight? This is a strong, valuable addition to the zombie movie pantheon, and a must-see for horror fans of all persuasions.
Posted by Grant at 4:54 PM