Game of Thrones: "Garden of Bones" 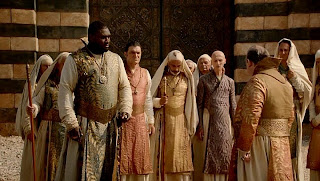 I think pretty much anything else about "Garden of Bones" falls by the wayside in comparison to the jawdropping scene of Melisandre (Carice van Houten) giving birth to an enormous terrifying smoke monster. Game of Thrones keeps its fantastical elements quite close to its chest. We've seen white walkers twice, and of course Daenerys now has her dragons, but all told it's pretty low on fantasy. That kind of gets blown out of the water here, and by holding back so much on the supernatural for the series' first 14 episodes the production team manage to make a phenomenal impact here.

The title comes from Daenerys' storyline, in which the starving remnants of her army arrive at the enormous walled city of Qarth. I'm still finding the entire Daenerys arc to be monumentally frustrating: it doesn't simply fail to connect to the rest of the series, some weeks (like this week) it doesn't even feel like the same genre of fantasy. Had Conan the Barbarian walked past the gates of Qarth muttering about evil wizards I wouldn't have been surprised.

Robb Stark gets a love interest in the aftermath of his latest battle. There's a slightly tedious fashion in which she (Talisa, played by Oona Chaplin) is introduced; usually Game of Thrones is more subtle than this. She is an appealing character, but really does feel like a character in a television drama when the rest of the cast generally feel like actual people.

Arya Stark and her friends are taken to Harrenhall, where we get to see some absolutely horrific torture before she gets picked out of the crowd by Tywin Lannister and made his cup bearer. Charles Dance is a great actor, as is Maisie Williams, so it's nice to see they're sharing some scenes for a while. The torture was a bit full-on and unpleasant, however; did we need to see it in such graphic detail?

Finally, back in King's Landing Tyrion decides to send young King Joffrey a pair of prostitutes to calm him down, and Joffrey responds by forcing one woman to beat the other with a heavy metal rod. I'm not sure I have words. Joffrey's actions are utterly vile, but I find the actual series rather vile for showing me the scene. It's not confrontational drama, it's actively repellent. Combined with the torture in Harrenhall and a fairly graphic amputation on the battlefield, it makes "Garden of Bones" the most unlikeable episode of Game of Thrones so far. It manages to take violence against women to a new height at precisely the moment when I'm really feeling sick to death of TV representations of violence against women. It's excellently produced, staged and performed, yet horrible to watch and impossible to un-see.

Well made, and obviously required viewing if you're following the plot, "Garden of Bones" is not a pleasant experience. It's the first duff episode of the season, giving us a rolling score of 75%.