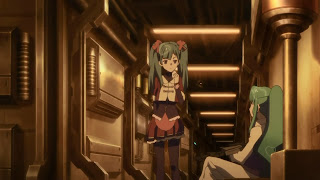 It's been a while since I reviewed the first two episodes of this anime, so to quickly recap: AKB0048 is a science fiction animated series from Japan, and is a spin-off for the immensely popular girl band AKB48. It follows a trio of teenage girls who aspire to join the interplanetary pop troupe AKB0048 and perform to colonies across the galaxy - many of whom have banned entertainment.

This third episode, "Stardust Selection", picks up where the second left off: the girls are onboard one of the AKB0048 spaceships and must undergo a rigorous audition process to determine if they're suitable to be the new understudies. In order to prove themselves, the contestants are tasked with defending the band during an upcoming guerilla contest - to the death, if necessary.

This continues to be an anime that's much, much better than it has any right to be. It's a cash-in on a corporately manufactured pop group re-imagined as a science fiction action series. The creative strategy for the series appears to be to throw everything imaginable into the mix at once: action, comedy, drama, pop music, dance, teen soaps, lightsabers, giant robots, Pokemon-like creatures, ancient prophecies, dogfights - you name it, they've shoehorned it in. This shouldn't work, yet somehow out of this mess comes a really entertaining series.

I really liked the resolution to this episode, which I won't spoil. It made a lot of sense and did actually come as a bit of a surprise. It's testament to how fluidly the various elements of the series works that you can go from a bunch of aspiring pop stars rehearsing a song to the same girls crouching among some rubble taking potshots and giant robots with machine guns, and it doesn't seem odd or out of place.

This series is currently running three for three in terms of watchability; I feel faintly ridiculous recommending it to people, but there you are. AKB0048 is genuinely entertaining stuff.
Posted by Grant at 1:40 PM