Under the Dome: "The Fire" 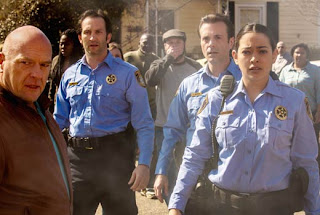 With Under the Dome's second episode, most of my suspicions - both positive and negative - seem to be getting proven correct. With the Chief of Police dead, Mayor "Big Jim" Rennie goes into overdrive to hide his secret drug manufacturing industry. This leads to a string of unintended consequences - chiefly the fire referred to in the episode's title.

This episode brings with it a fairly significant pedigree in that it's written by Rick Cleveland, who won an Emmy award in 2000 for his West Wing script "In Excelsis Deo" (co-written by Aaron Sorkin). Given the matter-of-fact and fairly perfunctory work done with the characters in this episode, you'd be forgiven for thinking that with "In Excelsis Deo" Sorkin may have done a lot of the heavy lifting. It's not a bad episode, but it's a superficial one. It pushes the plot forward and solidifies what each character's arc is likely to be, but it's pretty slack in giving anyone any kind of depth or nuance.
Dean Norris is a stand-out as Jim Rennie, giving the character a very believable balance of criminality and likeability. His performance is reminding me a lot of Michael Chiklis' work on The Shield: not simply because of the physical resemblance, but also in the way they both manage to give a fairly horrible person a lot of hooks on which an audience can still engage with them. Ned Bellamy is less effective as Rennie's accomplice, the meth-addicted Father Lester Coggins. In Bellamy's case I think the problem lies more with his character than his performance; he feels like a bit of a Stephen King cliche to me.

Mike Vogel and Rachel Lefevre are both very solid as Dale "Barbie" Barbera and Julia Shumway. They're pretty much cemented here as the lead characters of the series, and I expect they'll start driving the narrative as we go on.

The one aspect of the series that really isn't working is the one focused on Junior Rennie's kidnapping of his ex-girlfriend Angie. It fails to work for three reasons, I think. Firstly, it's not showing us anything we haven't seen a hundred times before. Secondly, and I think more importantly, it's something we've seen a hundred times before. I'd really appreciate more drama that relies on character interaction to generate drama and not another privileged insane man hitting and chaining up a crying young woman. Finally, it's just not believable. What are the odds that Junior will flip out and turn into a creepy psychopath on the exact same day that the dome descended on the town? Perhaps the two will be linked. Certainly I hope they are, because it might justify this bit of the story more. As it stands I wish they wouldn't include it.

This episode is enjoyable enough, but it's the sort of enjoyable that's best followed with a shrug and the words '...I suppose'. It certainly ends on a great note, and suggests some very dark things in the town's future. For one thing they're rapidly running out of functioning police officers. That's never good.