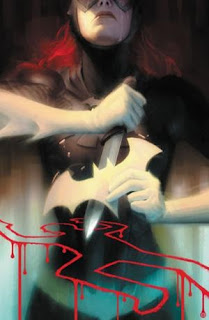 So Comicon is nearly upon us, which usually means an avalanche of announcements involving new titles, new creative teams for popular superheroes, movie trailers of comic book spin-offs and all manner of things. I'll do my best to filter through the junk and post about the announcements that actually get me excited.

One thing I'm hoping for is a fresh wave of titles from DC: not a few each month in dribs and drabs, a big semi-relaunch of the New 52 to get people excited again. At least 10 books in one month should get people looking in their direction again - as well as give them the chance to introduce some fresh writers and artists, maybe even some women too.

A man can dream.

This is, hands down, the best issue of Batgirl that Gail Simone has written. It is a rich, beautifully observed character piece that shows just how badly Barbara has been affected by killing her brother. It also finds time for Babs to go on a date, which is an incredibly warm and heartfelt sequence, as well as for Jim Gordon and Batman to have a face-to-face over what Batgirl has done. Fernando Pasarin and Jonathan Glapion do some brilliant art here as well - the facial expressions they give Barbara completely sell the emotional heart of the story. (5/5)

"Zero Year" continues with this second instalment, in which Bruce struggles to succeed as a vigilante while fighting it out with Alfred over whether or not he should announce his return to Gotham City. I continue to enjoy this radically different take on Batman's origins; while "Year One" remains an absolute classic of superhero comics, "Zero Year" ably proves there's more than one way to tackle an origin story. Capullo's art is great, and whoever decided to represent Bruce and Edward Nygma's first conversation in the form of a board game is a genius of visual storytelling. (4/5)

So after the massive two-year story arc wound up last month, you'd be forgiven for thinking Daredevil would run for a few months with some lighter, more self-contained material - and for the bulk of this issue you'd think you were correct. Matt Murdock is confronted by the man who used to bully him at school, and who now needs to be defended in court. And then- well, that would spoil the issue. Let's just say this book was a lot more open-ended that I thought it would be based on the pitch. As always, sterling, unmissable stuff. If Daredevil's not on your pull list, shame on you. (4/5)

Oh this book is on shaky territory: back in 2011 Paul Cornell reportedly created Horsewoman - a paraplegic hero with a psychic bond with the horses she rides - in part because DC was getting rid of its one major disabled hero Oracle. Now she appears to have been magically cured, which is a very touchy subject among the disabled. Let's wait and see what happens before jumping to conclusions: this book has one issue left, after all. Asides from that caveat, this is a great comic book: exciting, dramatic and beautifully illustrated by Chad Hardin and Wayne Faucher. (4/5)

Last issue somebody tried to assassinate Chas Worthington. This issue he begins the search to find out why, and to begin to uncover a new plot against him and his community on New Texas. This isn't an outstanding issue, mainly because it seems to fall between narrative beats: it follows up from a great issue last month, and looks set to lead into an interesting issue next month, but for now seems to fall in between. It will almost certainly read a lot better in trade, but as a single issue experience it was kind of lacking. I think I may drop this comic on a month-to-month basis and just stick with the collections. (3/5)

It turns out Clint Barton has an older brother who looks just like him. This was news to me, and I'm glad the introductory page pointed this out otherwise Hawkeye #12 would have been entirely inexplicable. With that bit of information in hand, however, this becomes another top-notch relatively self-contained character piece from a comic that's consistently full of them. Guest artist Francesco Francavilla has a wonderful moody style that really complements Fraction's storyline, and the now-standard dense panel layouts give this book a lot more bang for its buck than most of its contemporaries. (4/5)

It feels like DC has been hyping up this crossover for the better part of two years - mainly because they have - and it certainly is extremely well illustrated by the old Aquaman team of Ivan Reis and Joe Prado. As for how it's written, weeeell... it's not a total disaster. Geoff Johns can write strong dialogue and knows how to script a big heroic moment. The downfall of this book is that it has to shoehorn the plot to a place where the Justice League and the Justice League of America would start to fight each other, and given they're all on the same side that's more than a little difficult. Basically for this plot to work DC's superheroes all have to behave like dicks. That trick didn't work for Marvel with Civil War or Avengers vs. X-Men (not creatively, at any rate) and I don't think it works here. I'll probably pick up part 2 next week to see how things go, but this isn't looking promising. (2/5)

Maybe I missed this over the last few issues, but when did Katana get so leery? This issue is full of shots of cleavage, buttocks and slender women with D-cup breasts pouting in anatomically unlikely positions. In terms of storyline it's all over the place - the confrontation with the Creeper deflates in a caption telling the reader to go check out The Creeper #1 in September while the climactic face-off with the evil ninja clan is deeply unsatisfying. I had been enjoying this book in recent months, but if this is a sign of its future quality I won't be enjoying it for much longer. (1/5)

Another month, another new Vertigo-esque Image title. This one, based around a community of survivalists, simply didn't grab me. I think it's biggest problem is the pace: too little happens in this issue to really give me a handle on what the book's about, and doesn't excite me enough to want to read next month and find out. If you're really digging Image's output at the moment, by all means check it out - but keep your expectations reasonable. This isn't bad, it's just not very interesting. (2/5)

Brian Wood's second story arc kicks off with a desperate plan to root out the mole inside the Rebel Alliance by tackling the problem from the other way around: get captured by the Empire and find out who their rebel contact is from there. Ryan Kelly comes onboard as artist with a wonderful, slightly sketchy style and certainly no problem in capturing the looks of Mark Hamill, Carrie Fisher and Harrison Ford. This issue continues Wood's trend of picking up emotional threads from Star Wars and exploring them in a depth that the movie franchise simply never had time for: in the case of Leia, it's the genocide of Alderaan, and in the case of Luke it's the murder of his aunt and uncle. It's beautifully observed, richly presented spin-off fiction. (4/5)

Things fall apart completely for our characters in this final, apocalyptic chapter of Storm Dogs. It's rich with science fiction ideas, and has been an incredibly well thought-out story. Beautiful, painterly art gives this book a decidedly European feel - it wouldn't be out of place in an issue of Metal Hurlant and would be one of the best strips in there if it was. The biggest surprise is the cliffhanger ending: I knew a sequel miniseries was coming, but I'd falsely assumed that each series would be relatively self-contained. When a comic is this enjoyable, however, it's hard to complain that you're getting more of it in the future. (5/5)

The True Lives of the Fabulous Killjoys #2

Becky Cloonan seems to be having a great year. She's got plenty of books coming out - either independently or through publishers like Dark Horse. She's attracting lots of critical attention at the same time, and either she's recently had a massive boost to her fanbase or her existing fans have become a lot louder in recent months. She deserves it. Her art is expressive, charming and distinctive. I don't think it's a coincidence that the buzz I'm hearing about Killjoys is about her art and not the impressive script by Gerard Way (Umbrella Academy) and Shaun Simon: Cloonan is simply that good. I pretty much buy what she draws now on instinct. (4/5)

Huntress and Power Girl are on the run from DeSaad's forces, as they weigh up whether or not to reveal themselves to the world's superhero community and get some support. As seems to be the case with this issue, the most appealing aspect of Worlds' Finest is the interplay between its two leads. It's funny, it's warm and feels genuine and heartfelt. Robson Rocha and Wayne Faucher's artwork sells this, much like Pasarin and Glapion did with Batgirl this week. This isn't a brilliant issue, but it's a solid and entertaining one. (3/5)

I was underwhelmed with the segue in issue #6, but any doubts over this title has dissipated with this seventh issue, where the segue immediately links into the main plot and pushes the entire book forwards. This is genius, contemporary storytelling - inventive panel layouts (check out the visual representation of teleportation in the final pages), creative expression of narrative (an entire page of plot is rendered as Pinterest updates), sparkling dialogue, humour, heart and character. This is the superhero team book everyone should be reading. It has Loki in it. Loki. (5/5)

Winner of the Week: It's a close one - Young Avengers and Storm Dogs were both sensational - but I'm giving the prize to Batgirl this week.
Loser of the Week: Katana - very disappointing.
Posted by Grant at 4:27 PM