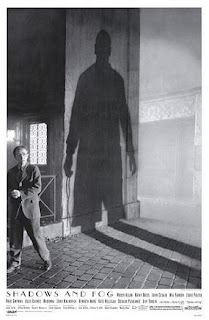 A hapless office worker (Woody Allen) is woken in the middle of the night and press-ganged into a vigilante mob. Tasked with hunting down a serial killer, he is told to stick to the plan - only no one has told him what the plan is. Meanwhile a circus acrobat abandons her cheating boyfriend and walks the streets, eventually coming into the fold of a group of local prostitutes. All the while the serial killer continues to anonymously stalk the streets.

Shadows and Fog is a stunning blend of disparate elements. It's shot like F.W Murnau, is scripted like Franz Kafka yet stars an archetypical nebbish protagonist straight out of any number of previous Woody Allen vehicles. Previous films situated Allen's standard comedic character within a comfortable, well-fitted environment; Shadows and Fog throws him completely out of his element, still wisecracking and nervously fumbling his way through the story - but it's a darker, far more sinister story. Rather than dictate the film's overall tone, Allen - as the hapless protagonist Kleinmann - is forced to actively fight against it.

This is a film heavily loaded with Hollywood stars - one of the advantages of being a director of Allen's stature is that everyone in the industry wants to work with you. Asides from standard players like Mia Farrow here Allen is supported by John Malkovich, Kathy Bates, Jodie Foster, Donald Pleasance, John Cusack, Madonna, Wallace Shawn, David Ogden Stiers and Lily Tomlin. Some of them perform in near-cameos (Foster) while others admittedly just make actual cameos (Madonna), but collectively they lift the material so much through sheer talent and screen presence.

The real star, however, is cinematographer Carlo Di Palma. He was already an industry legend by the time he collaborated with Allen, having forged his reputation as director of photography to Michaelangelo Antonioni. Shadows and Fog was his fifth of 12 collaborations with Allen, but in visual terms it's his best. He imbues the film with an eerie quality, not so much black and white as black and grey. This is a wonderfully creepy, atmospheric film that echoes classical German cinema (particularly F.W. Murnau) faultlessly while still finding room to forge its own identity.

Allen's screenplay sparkles with intelligence and wit. It's beautifully shot, brilliantly acted and atmospherically lit. This was the first Woody Allen film that I ever saw, and even now it's still one of his all-time best.
Posted by Grant at 10:17 PM