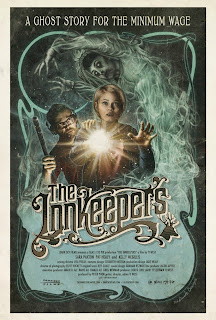 Reviewing a horror movie can sometimes be difficult, because most rely on a certain level of surprise for their scares to work. As a result I'm going to have to be fairly circumspect about the plot of The Innkeepers, a 2011 American horror film written and directed by Ti West.

I have heard about Ti West repeatedly in recent years, and he's become one of the horror directors that film buffs seem to recommend we keep an eye on. His 2009 film House of the Devil scored a lot of attention and praise; after seeing The Innkeepers I am now keen to track that one down and give it a watch as well.

The premise: the Yankee Pedlar Inn is a hotel that, while once immensely popular, is now closing down. While the owner is holidaying in Barbados, two staff members - Claire and Luke - hold the fort for the hotel's final weekend of operation. There have long been rumours of a ghost haunting the hotel, and with only two guests booked into the entire hotel, Claire and Luke decide to hunt down the ghost and prove whether or not it exists.

This is a slow-burn supernatural horror film, with tension that builds slowly but incessantly from start to finish. There's nothing here audiences haven't seen before, but it's presented crisply and effectively. It's clearly a very low budget production, but West has crafted a story that clearly doesn't need a lot of money to tell.

At the centre of the film is Sara Paxton as Claire, who delivers an incredibly strong and endearing performance. I don't think I've seen her in anything before, but if there's any justice she's got a long career ahead of her. She has an enormous amount of presence and appeal. Supporting her is Pat Healy as Luke, who comes across as something of an American Simon Pegg. He's solid, and balances the comedic and serious parts of the script very well. Also featuring is Kelly McGillis as Leanne Reese-Jones, a former actor turned spiritualist who is probably the film's weakest character. It's no fault of McGillis' - she proved herself a talented actor years ago - but it does seem oddly convenient and trite for her to be there, and it's the film's one key weak point.

Otherwise this is a great movie. Track the DVD down, put it on late at night with the lights turned off and enjoy the show.
Posted by Grant at 7:48 PM