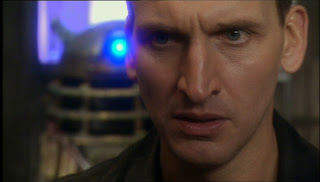 Who50 counts down to the 50th anniversary of Doctor Who by reviewing my favourite episodes and serials over the history of the programme, counting down from #50 to #1. Today, #18: "Dalek", a 2005 episode written by Robert Shearman and directed by Joe Ahearne.

The Doctor and Rose arrive in the private museum of the eccentric American millionaire Henry van Statten, filled with alien relics and artifacts. Locked inside a room at the centre of van Statten's archive is an alien; terrified and alone, in excruciating pain. Rose wants to help it, because that's what the Doctor would do. Isn't it?

"Dalek" is the episode that took the 2005 relaunch of Doctor Who and cemented it as a worthy replacement to the original series. It's the best episode of Christopher Eccleston's brief time as the Doctor, and one of the best episodes of the entire 50-year franchise. It achieves this for a couple of reasons, and it's worth going through them one by one.

First and foremost, it reintroduces the Daleks to Doctor Who. For a while it was touch-and-go as to whether or not the BBC would secure the rights to re-use the iconic monsters. I'm glad they managed it, because Doctor Who without the Daleks just wouldn't feel authentic to me. Cleverly, Russell T Davies dictated that only one Dalek would appear. He was inspired by Shearman's earlier audio drama "Jubilee", which featured a single Dalek in a similar situation, and it was a masterstroke. An army of Daleks is just a bunch of monsters. A single Dalek can be shown as calculating, xenophobic, scared, cruel and all manner of other emotions. It becomes real. My favourite Dalek stories are generally the ones where the Daleks are shown to be actual intelligent beings and not just monsters or de facto robots (it's amazing how many viewers still think Daleks are robots). "Dalek" demonstrates the titular creature to be highly intelligent indeed.


Secondly, "Dalek" fills out the backstory of the new series and establishes exactly what's happened to the Doctor, the Time Lords and the universe in general since we last saw him on television. It was clear from "Rose" that something terrible had happened, and it was explicitly stated in "The End of the World" that the Time Lords were gone. "Dalek" introduces the Time War, and the Doctor's double genocide of both the Daleks and his own people. Christopher Eccleston's Doctor is an emotionally damaged man, and this episode brings that element of his character into focus. He is the post-traumatic stress disorder Doctor, spitting venom at a captive, tortured Dalek with such malice that he is literally spitting at it.

It challenges our notion of how the Doctor behaves, in a way that's far more effective than almost every other story. We expect him to defeat monsters. What we don't expect is for him to start screaming like a madman at a Dalek, shouting "why won't you just die?!" with a venom that initially seems highly uncharacteristic. This is an episode where the facade cracks and the real Doctor begins to leak out, and it's managed without trite and obvious speeches like you got from Davros in "Journey's End". It takes Rose's intervention for the Doctor to stop, and he's suddenly ashamed. This episode is rich with sides and facets of the Doctor that you simply don't get to see.

It's also the episode where Rose fully establishes herself as a companion, and as a person of exceeding value for the Doctor. A lot of people - myself included - grew a little weary of Rose by the time she left the series, and certainly by the time she briefly came back in Season 4, but against Christopher Eccleston she shines.

This is a wonderful piece of television drama: a great script by Robert Shearman (it's criminal he hasn't written for the series since), strong direction by Ultraviolet's Joe Ahearne, good acting, tension, action, thrills, backstory - I could go on and on. The Eccleston era was far too short, but this is it's finest episode.
Posted by Grant at 9:54 AM