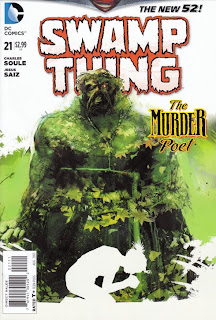 The Dark is rattling along with four reasonably solid titles and three books spiralling towards cancellation. The top seller in June was Constantine, which is not unexpected as its only four months old. It declined 9% from May, which isn't too dangerous as long as that drop slows down over the next few months. I can see Constantine surviving quite successfully in the long term with about 20-23,000 readers.

Demon Knights and Dial H have both been cancelled already, and no wonder: Dial H is down by 57% since June 2012 and Demon Knights down by 39%. Neither is selling more than 12,000 copies.

Phantom Stranger, now retitled to Trinity of Sin: Phantom Stranger - because those missing three words were clearly in the way of its success, shipped 17,241 copies in June. That was actually 6% above May 2013 thanks to a shift of writer from Dan Didio to J.M. DeMatteis. It's still unlikely to last much longer I suspect. The character concept and design is woefully out of date and it shows.