Who50: "The Impossible Planet"/"The Satan Pit" 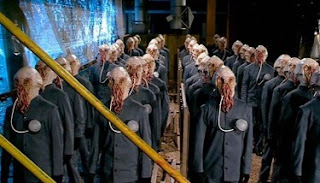 Who50 counts down to the 50th anniversary of Doctor Who by reviewing my favourite episodes and serials over the history of the programme, counting down from #50 to #1. Today, #16: "The Impossible Planet" and "The Satan Pit", a 2006 two-part story written by Matt Jones and directed by James Strong.

One of the things that Doctor Who found problematic in its first two years was iconic monsters. The production team gave it their best shot in 2005 with the Slitheen, who cropped up in three out of the first twelve episodes, but audiences failed to respond to them and as recurring monsters they were quietly shelved (although they did get a fresh lease of life in the subsequent spin-off series The Sarah Jane Adventures). They were intended to return in this two-parter as a cost-saving measure, but instead the money was found to create a new monster - the Ood - so long as only the rubber masks were made and the rest of the monster got to wear a suit. Out of necessity comes genius: the Ood steal the show in these episodes, and became the first bona fide hit monster of the new series.

The Ood are ridiculously creepy. They're eerily calm, and wander about with a glowing orb in one hand that's connected to a head that looks like a cracked egg vomiting pasta. When they all fall under the psychic control of some external entity they segue from creepy servants into essential a zombie horde - only scarier, because they just calmly tell you they're about to kill you as they advance toward you.

If that wasn't creepy enough, then there's Gabriel Woolf (Sutekh from "Pyramids of Mars") sneaking around quietly possessing people with a very creepy turn of phrase: 'I'm standing right behind you - don't turn around. You'll die.' And on top of that there's what lies beneath the deep, black pit on the planet below.

This two-parter is basically the first (and one of the few) fully-fledged attempt to recreate a classic Doctor Who story in the context of the 21st century. It's a base-under-siege narrative with iconic monsters, possession, a rising body count and the Doctor desperately racing to hold things together. As we approach the top of this countdown, more and more stories make the list not for being startingly original or progressive but simply for being really bloody good. For me, "The Impossible Planet"/"The Satan Pit" is one of those stories.