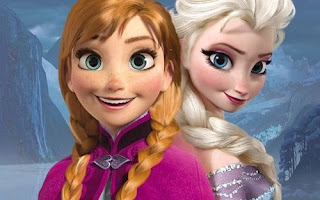 A few weeks back I was linked to a tumblr post by the Feminist Fangirl, titled "Reasons Why I'm Not Supporting Disney's Frozen". At first I was fairly dismissive of the post, primarily because it discusses reasons not to watch a film that nobody has seen yet; it seems a bit like jumping the gun to boycott a film without actually knowing its proper context and content. Sure, Disney have very loosely adapted Hans Christian Andersen's The Snow Queen to create their upcoming film Frozen, but that's basically par for the course. (And feminist viewers got to dodge a serious bullet with the changes Disney made to Anderson's The Little Mermaid, trust me.) It will nonetheless feature a female protagonist and a female antagonist, and I can't see how - in the broader context of Hollywood feature films - that this is a bad thing.

It did get me thinking about how female protagonists are treated in animated feature films. My gut feeling was that surely Disney was better at this than their competitors. When I think of Disney characters, most of the ones who come to mind - Ariel, Mulan, Snow White, and so on - seem to be women. How rare are women in animated films?

Let's go back to 1995, which was when Pixar released their first animated feature and when Jeffrey Katzenberg acrimoniously split with Disney to create Dreamworks Animation. Since that time:
So Disney are doing better than their competitors in representing women, but let's be honest - 25% isn't exactly a winning proportion. Disney, for all their positive work, could be doing a lot better. When I used to work behind the counter of a video library, my go-to studio for animated films for girls (and their parents) was Japan's Studio Ghibli. Since 1995 that studio has released 11 animated features, and of those 11 films eight (73%) follow female protagonists. These are protagonists with courage, determination and agency. The bottom line for me is that if you want to show your child some great animated films with strong, independent women, show them Spirited Away, My Neighbor Totoro and Kiki's Delivery Service.

Jumping back over to Frozen, however, I'm looking forward to it with enthusiasm. I think Walt Disney Animation Studios are on a roll at the moment, thanks to exceptionally good films like The Princess and the Frog, Tangled and Wreck-It Ralph. I like that they're including women as both heroes and villains, and hope they continue to expand their use of female characters in the future. Sure, a male supporting character has been added to Andersen's original story: there's a sensible reason for that. Disney want boys to go and see Frozen as well. The Princess and the Frog, which was a wonderful movie, was developed for and promoted to a female audience. Despite rave reviews it only grossed $267 million - a lot less than Disney was expecting. For their follow-up film, Disney retitled Rapunzel Unbraided to Tangled, highlighted a male supporting character in the advertising, and grossed $590m as a result. Tangled wasn't appreciably better than The Princess and the Frog, but it appealed to both boys and girls. A male character in Frozen (not to mention the gender-neutral title) simply targets their new film in the same fashion.

(One last note on the Feminist Fangirl's article, and I've dropped it in here at the end because it really is a niggle: I found it odd that she claimed Disney 'makes stories about the same thin, wide eyed white women over and over again while missing out on any opportunities for diversity' when of the five female protagonists they've used in the past 18 years one was a Native American, one was Chinese, one was African-American and one was a cow. When only one of your female leads (Rapunzel) is a 'thin, wide-eyed white woman', it kind of puts a dent in any accusations that Disney don't care about diversity.)
Posted by Grant at 10:05 AM