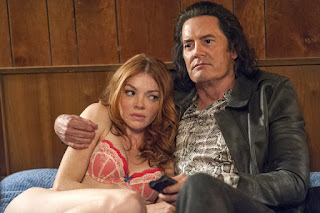 While in custody Bill Hastings (Matthew Lillard) admits to his wife that he has had an affair. Bad Cooper (Kyle MacLachlan) goes on the hunt in South Dakota. Good Cooper (also Kyle MacLachlan) meets the Man from Another Place in his new form. In Twin Peaks, Hawk (Michael Horse) continues hunting through the woods.

I think it is really obvious by this second episode that the Twin Peaks of 2017 is significantly different to the Twin Peaks of 1991. The series is much more disturbing now, not just in content but in presentation. Scenes that would have been accompanied by a melodic score are now backed by harsh deep bass rumbles. Without the confines of a 42-minute time limit, events are stretching out to dizzying lengths, and performed with a deliberate slowness. The scratchy hand-made feel of Lynch's most avant garde works is infiltrating Twin Peaks from the sides. This all adds up. The series used to be a soap opera satire with occasional intrusions of weird arthouse moments. Now the series is a slow-boiling, constantly groaning, and deeply unsettling horror show.

I imagine a mainstream audience will not embrace Twin Peaks this time around. I remain surprised that so many people embraced it the first time around, but this year even the handholds onto which the average viewer could at least engage with an odd but understandable small town drama have been hacked off. You are on your with this version. I am pretty convinced David Lynch does not care if an audience watches his new series or not. I think he is making it for his own entertainment; and it is a much stronger and purer version of Twin Peaks as a result.

If Season 3 continues in this vein it may well go down as the greatest accomplishment in television horror ever made. It is overwhelmingly unsettling, including unexplained hauntings, dream spaces, quivering talking trees, and a prolonged and shockingly frank murder. The tone is the thing that tips it over the edge: queasy, uncertain, and seemingly relentless. What is more, the series steadfastly refuses to explain anything. It is up to the viewer to simply enjoy the ride.

Fans of the famous Red Room will likely have a ball here, with extended scenes of Cooper meeting Laura Palmer (Sheryl Lee), her father Leland (Ray Wise) and Mike the one-armed man (Al Strobel) again. He also meets the Man from Another Place, originally played by Michael J. Anderson but now - after a particularly vicious falling-out between Anderson and Lynch - represented by a quivering computer-generated tree with a talking rotten fruit for a head. It is classic Twin Peaks taken to an extreme: weirdly disturbing, yet oddly hilarious at the same time. The series always used to work best in that liminal space between the absurd and the disturbing, and it is working in that space now.

Kyle MacLachlan does an outstanding job playing two Coopers, one trapped in a netherworld and the other occupied by an insane murderous spirit. It continues to be great seeing Michael Horse get more material as Hawk; he felt a little under-used in the original run. Nicole LaLiberte makes an impact in her one key scene as Bad Cooper's criminal associate Darya.

At the end of the episode we get to see James Hurley (James Marshall) and Shelley Johnson (Madchen Amick) share a moment in Twin Peaks' famous Bang Bang Bar. It is a wonderful prolonged moment: they share looks, there is a sort of wistful, good-humoured nostalgia, Chromatics are playing live on stage. It seems the nicest that Twin Peaks has been since before Laura Palmer died. It almost feels hurtful to upset the town again.
Posted by Grant at 9:16 AM