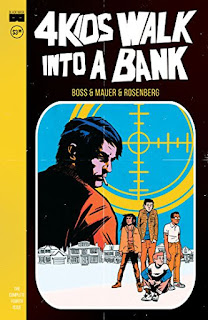 It strikes me as inevitable that someone is going to turn this series into a feature film, because while it works beautifully as a comic book it contains the perfect ingredients to make a fantastic movie as well. That film will potentially become a moderate hit and a cult favourite, and if you act now you can claim you knew it back when it was an independent comic book.

The structure is great. The use of fantasy sequences feels pitch-perfect. The characters are immediately recognisable from anybody's childhood. This is a stunning miniseries that is worthy of a much wider audience than the one that it is getting. (5/5)

Under the cut: reviews of Aquaman, Batman, and Green Arrow.

Aquaman returns from his latest surface world to discover that Atlantis' government has deposed him as king, leaving a violent zealot in his place. It's reasonably well written with decent artwork and sharp, bold colours. It also feels like the hundredth time that Aquaman has struggled to rule over Atlantis and fight back against radical factions. It dominated Geoff John's run on the book. It's now dominating Dan Abnett's. I for one am growing very tired of how Aquaman constantly cycles back to the same plot beat over and over. There is so much potential for stories with this character, and by and large they are getting ignored with this constant focus on domestic strife underwater. (2/5)

Batman investigates a murder with the unexpected - and largely unwanted - assistance of Swamp Thing. This one-shot issue reunites writer Tom King with his immensely talented Sheriff of Babylon artist Mitch Gerads, and the end result is one of the absolute best comic book issues I have read this year. It's smart, funny, cleverly structured and one of the best uses of Swamp Thing I have read in an absolute age. Is it the perfect tribute to the late Bernie Wrightson? Absolutely. Is the fact that the murder victim looks like Alan Moore a coincidence? Very probably not. I wonder if King and Gerads are sharing a small opinion about DC's upcoming Superman/Watchmen crossover. (5/5)

"The Rise of Star City" is just a pitch-perfect comic book blockbuster, with the entire Green Arrow cast teaming up to fight a city-wide takeover of Seattle by a secret criminal organisation. For me the greater selling point than Benjamin Percy's excellent writing is Juan Ferreyra's artwork, It has a rich, painterly style that is not only hugely beautiful to look at but which doesn't look like any other book currently published by DC. The panel layouts - whether dictated by Percy or Ferreyra - are exquisite. This is a fantastic superhero title that continues to run on all cylinders. (5/5)
Posted by Grant at 8:13 PM