Colditz: "Frogs in the Well" 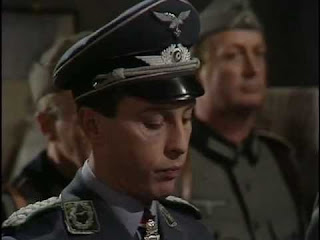 It is 4 February 1974, and time for another episode of Colditz.

Lt Player (Christopher Neame) thinks he has found an escape route via the closed castle theatre. After Colonel Preston (Jack Hedley) convinces the German authorities to re-open the theatre for morale, things are all set for an escape attempt - until Player discovers that the French are attempting an identical escape using the same route.

I suppose this sort of thing would have to happen eventually: military officers of multiple nations all imprisoned together, segregated from one another and not speaking each other's language. Sooner or later two groups are going to have the same idea, and if they're working without the knowledge of their superior officers disaster is bound to occur. It is a great concept for an episode, and the execution is enhanced even further by some great interactions between Lt Carter (David McCallum) and Major Mohn (Anthony Valentine).

Mohn is a fabulous character. He is shrewd, competitive, and hugely ambitious, and is also very clearly the one actual Nazi among the castle's German officers. That obviously makes him immediately and irrevocably loathsome, but at the same time the series' writers have gone out of their way to humanise him as well. Here he develops an odd sort of respectful banter with Carter through their mutual interest in chess. Their two games here sparkle with a sort of dark wit, but at the same time the series never lets us forget that Mohn is also a Nazi. At one point, despite their growing connection, Mohn attempts to have Carter shot by a firing squad. Given that this second and final season tracks the prisoners' lives all the way to the end of the war, I do wonder quite what's going to happen to Mohn in the end.

Anthony Valentine plays the part wonderfully. It's a performance that is far beyond making Mohn 'the guy you love to hate'. He makes the character a visible zealot, having completely been turned to the Nazi ideology and absolutely believing he is the moral authority in any conversation in which he participates. I particularly adore the way his hard-line position on treating prisoners chafes against the more conciliatory and measured attitude displayed by Uhlmann (Hans Meyer).

The episode also gains strength from building on the multi-episode arc of hiding officers inside the Castle to fake an escape attempt, and then to swap them with actual escaping officers to delay the Germans discovering those officers' absence. Mohn has now worked out the ruse, but cannot find where the officers may be getting hidden inside the castle.

This is an excellent episode, one that can comfortably rank among the series' finest.
Posted by Grant at 11:43 AM