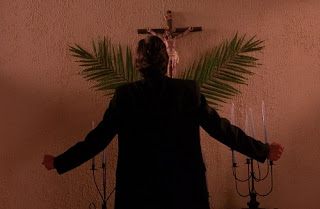 The problem with the previous episode of Twin Peaks is that it is so inventive, strange and unexpected that any follow-up would likely disappoint. Episode 3 is the first episode of the series not written by David Lynch and Mark Frost, and you can immediately sense the difference. This is a much more conventional hour of television: not bad by any stretch, but unavoidably somewhat underwhelming.

The writer in question is Harley Peyton, who will go on to write a number of episodes for the show. The director is Tina Rathbone, an independent filmmaker who had directed David Lynch as an actor in her 1988 film Zelly and Me.

There is much here that continues to push Twin Peaks' own idiosyncratic aesthetic. Laura Palmer's funeral is another classic combination of comedy and tragedy: Bobby (Dana Ashbrook) rails against the assembled crowd for failing to save Laura before she died, a fistfight breaks out, and Leland Palmer (Ray Wise) hurls himself onto Laura's descending coffin in an act of grief-stricken mania. As with previous key scenes, the viewer can feel able to laugh or cry as they feel fit. The series itself does not seem willing or interested to push either way. This is also the episode where Laura Palmer gets a cousin named Maddie, also played by Sheryl Lee. It is yet another obvious nod to soap opera conventions, although she only appears briefly here and does not fully get introduced.

Audrey Horne (Sherilynn Fenn) extends her crush on Agent Cooper (Kyle MacLachlan). He quickly picks her out as having slipped a note under his hotel room door, warning him to check out the Canadian brothel One Eyed Jack's as part of his investigations. The way Audrey seductively flirts with Cooper, and the manner in which he good-naturedly tolerates her advances, is beautifully staged and presented.

Elsewhere the episode feels a little too straight-forward for Twin Peaks. Norma (Peggy Lipton) is reluctantly facing her husband's potential parole after a stint for manslaughter. It all feels a little bit too much like a generic drama storyline, without any odd tones or self-awareness. Similarly Cooper's induction into the "Bookhouse Boys" vigilante gang, and their investigation into a local drug dealer all feels just a little bit too banal and ordinary. Truman does intimate that there is a long-held belief of some evil presence in the woods surrounding the town, but even while he elaborates it all feels a little too safe and normal after the Red Room dream sequences of the previous week.

Episode 3 is solid entertainment, and pushes the series forward, but it is definitely a small step down in quality from what has gone before.

It is worth pausing sooner or later, and I figure this episode is as good as any, and acknowledging how many actors in the series have immensely iconic roles in their earlier careers. Richard Beymer was Tony in West Side Story and Peter in The Diary of Anne Frank. Russ Tamblyn was also in West Side Story, as well as Seven Brides for Seven Brothers and The Adventures of Tom Thumb. Joan Chen was in The Last Emperor. Peggy Lipton played Julie Barnes in The Mod Squad. Michael Ontkean was Ned Braden in Slap Shot. Piper Laurie, of course, was a hugely successful actor prior to Twin Peaks, scoring Oscar nominations for The Hustler, Carrie and Children of a Lesser God. That is all before adding several David Lynch regulars, including Kyle MacLachlan and Everett McGill. It really is one of the strongest ensemble casts an American weekly series has assembled.
Posted by Grant at 9:53 AM