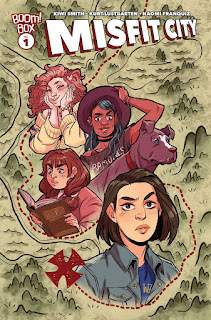 Cannon Cove is a small, half-forgotten town whose only claim to fame is that the 1980s hit film The Gloomies was filmed there. When an elderly resident dies, leaving an old chest to the town's dilapidated and under-funded museum, four young woman find a secret map inside that points to a real-life treasure buried nearby.

Boom Studios seem to working to quite a formula with their all-ages books, riffing on Lumberjanes to create a raft of titles involving strong groups of female protagonists in pop culture savvy situations. It is a nice alternative to the overwhelmingly male set-ups of most DC and Marvel books, and it has been great to see Boom's work rewarded with both critical and commercial success. Misfit City is the latest in their run of books, and from its first issue it seems like a pleasing and light-hearted tribute to 1980s adventure films - The Goonies in particular.

Now in all honesty I never boarded the Goonies train. The film never impressed me as a child as much as it did many of my friends, and as an adult I'm not quite caught in its nostalgia trap. I think Misfit City works pretty well to capture both those enthused fans and people like me, since the book's cast are for the most part pretty jaded about an old 1980s movie too. Altogether it's a really fun set-up: hopefully the next three issues deliver on the premise. (4/5)

Under the cut: reviews of Action Comics, All-Star Batman, Batgirl and the Birds of Prey, and Star Trek/Green Lantern.

After a relatively interminable pair of issues, Action Comics dives back into the action as a super-team of villains unite to bring down Superman once and for all. It's an old idea, one generally referred to as "the Superman Revenge Squad", that first reared its head in Superboy back in the 1960s. The new squad includes Hank Henshaw - aka Cyborg Superman - the Eradicator, Mongul, Metallo and Blanque. With that combination, and with Dan Jurgens writing, it really does feel like a return towards the "Death of Superman" era. Meanwhile Clark and Lois move back to Metropolis (clearly this arc is set after the current Superman storyline). This is just the set-up issue, but it's a promising opening chapter. (3/5)

The best use of Hush I've read in a while. A storyline that promises to flash back and reveal the younger days of Alfred Pennyworth. Some clever twists and turns. Best of all, a reunion between American Vampire creators Scott Snyder and Rafael Albuquerque with supremo colourist Jordie Bellaire. There's a lot of talented involved in this issue, and they absolutely deliver on their promise. After the fairly remote, vignette-based storytelling of "Ends of the Earth", "The First Ally" seems a more immediate and much warmer read. (5/5)

Batgirl and the Birds of Prey #10

It's time for the climactic showdown with Blackbird, a super-villain who can drain and absorb the powers of others. On the one side Blackbird and a mind-controlled (but not yet drained) Black Canary. On the other, Batgirl, Huntress, Nightwing and Green Arrow. It's a nice collection of heroes, and they all interact in wonderfully entertaining ways. Julie and Shawna Benson have a great handle on their cast, and a real knack for warmth and humour in among the vigilante action. It's a great climax to a three-issue arc, with plenty left over to be picked up down the line. For one thing, I cannot imagine this is the last readers will see of Blackbird. (4/5)

It is the final showdown between Khan, Sinestro, Kirk and Hal Jordan on the Star Trek universe's version of the planet Oa - home of the Guardians. To the issue's credit it is a big show-stopper finale, with large panels, great action beats and the like. That said, it never quite overcomes the problem that this been a massively over-stuffed abuse of continuity and story elements across two pop culture franchises, more interested in throwing every possible character into a blender than in actually telling a satisfying and complex storyline. I'm giving this issue credit where it is due, but this has been a terrible miniseries - and the open threads at the end do not fill me with confidence. (3/5)
Posted by Grant at 12:06 PM