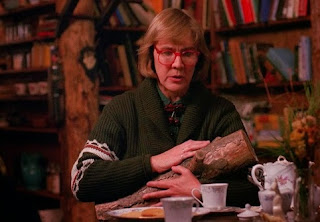 It is 10 May 1990, and time for another episode of Twin Peaks. Or, to put it another way, hey let's all celebrate the 27th anniversary of episode 5 of Twin Peaks.

There is a lot of plot advancement to enjoy in this episode of Twin Peaks, not only for the investigation into Laura Palmer's murder but also for the plot to burn down the sawmill, Shelley's (Madchen Amick) desperate need to escape Leo's (Eric Da Re) clutches, and two independent quests to find Laura's killer - one by Audrey and the other by Maddie, Donna and James. It feels as if there are more narratives simultaneously developing in this episode than other other episode so far. That's a lot of plates to keep spinning for 45 minutes.

The investigation at Jacques Renault's apartment turns up a fresh issue of Fleshworld magazine, with advertisements by both Laura and Ronette: Jacques, for lack of a better description, was their pimp. When Cooper and the police search for Renault's log cabin, they arrive first at the woodlands home of the Log Lady (Catherine E. Coulson), an eccentric who carries around and talks to a spiritually sensitive log.

The Log Lady is a tremendous character, not simply because of how ridiculous she looks but also because both she and the Twin Peaks residents treat her as someone utterly normal. Over tea Cooper is encouraged to ask the log for information: he finds it awkward and ridiculous, but everyone else around the table simply treat it as a matter-of-fact occurrence. It is through this conversation that we first get mention of the owls. We've seen one or two in the forests already, but now they take on an ominous new dimension. The Log Lady insists the police talk to her inside where the owls cannot see them. When describing hearing two men and two girls walking past her cabin, followed by a third man, and then hearing screams, she notes 'the owls were silent'. It's a funny scene, and also a creepy one, and easily the best new 'weird' addition since Cooper's dream back in episode 2.

Bobby (Dana Ashbrook) and Shelley (Madchen Amick) continue to conspire to take Leo (Eric Da Rae) out of the picture. Bobby has already hidden Leo's bloodstained shirt in Jacques Renault's apartment to implicate him; now Shelley tells a visiting Andy (Harry Goaz) that she overheard Leo and Jacques arguing about Laura on the night of her murder. The hilarity of their plot is their not knowing just how close to the truth some of it is.

This is a great episode for Bobby, since he also gets sent to counselling with Dr Jacoby (Russ Tamblin). Jacoby, using knowledge he's already gained from treating Laura, presses Bobby for any further information on her state of mind when she died. It causes Bobby to break down and cry; it is the first real sympathetic moment the character has had.

Ed (Everett McGill) and Norma's (Peggy Lipton) affair seems to come to a temporary end, as he cares for an increasingly fragile Nadine and she contends with a returned ex-con husband. Speaking of her husband Hank (Chris Mulkey), he turns out to have a lot more to do in Twin Peaks than first appeared. He confronts Leo over the latter taking over his drug distribution scheme, and we already know he's involved in something with Josie Packard (Joan Chen). In turn this episode reveals Josie is not the intended victim of Ben Horne's (Richard Beymer) plans for the sawmill but an active participant: Catherine (Piper Laurie) is the real intended victim, and has no idea. The sawmill half of this chain of characters is fairly interesting, but so far Hank simply is not engaging in any distinctive manner. The series does feel as if it juggling one too many story threads at once, and it seems Hank may be that one thread too many.

Audrey's continued flirtation with Agent Cooper continues. At the episode's outset it is vaguely adorable. Cooper asks her how old she is. 'Eighteen,' she replies, rather unconvincingly.
Audrey and Cooper. The chemistry between Fenn and MacLachlan really is delightful. At the episode's conclusion, when Cooper returns home to his hotel room only to find a naked Audrey waiting in his bed for him, it suddenly feels much less charming and uncomfortably inappropriate. It is a clever piece of audience manipulation.

Finally there is Leland Palmer (Ray Wise). He breaks down twice this episode - once in Ben's office and again in the middle of a hotel party full of Icelanders. The second one is particularly awful to sit through: Leland once again turns to sobbing fits when her hears music, dancing compulsively. Ben shoves Catherine in to dance with him to stop the Icelanders from noticing something is awry. Everyone joins in dancing, mistaking Ben's convulsions and pressing of his hands to his temples as weird dance moves and copying accordingly. It is a grotesque moment of utter cruelty, further isolating and mocking a broken man at his most vulnerable. It's a remarkable scene.

Episode 5 benefits from a beautiful script by Mark Frost, running solo with David Lynch to co-write. Frost's experience as a writer on Hill Street Blues enables him to give this episode a better structure than Lynch typically manages, and that enables him to push through a lot more story in the space of 45 minutes. Director Lesli Linka Glatter captures the script with a strong visual eye and a good sense of pace. Twin Peaks was one of Glatter's earlier directorial efforts. Over the following years she would contribute to the likes of ER, The West Wing, Gilmore Girls, Mad Men, The Good Wife and The Newsroom.
Posted by Grant at 5:03 PM