Star Trek: The Next Generation: "Lessons" 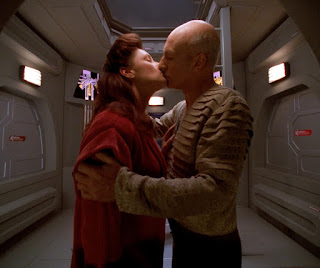 It is 5 April 1993, and time for another episode of Star Trek: The Next Generation.

Captain Picard (Patrick Stewart) begins a tentative romance with the Enterprise's new head of stellar cartography Lt Commander Nella Daren (Wendy Hughes). While they share a love for performing music, and Daren's enthusiasm helps Picard to open up to his past experience, a dangerous away mission puts their romance under strain.

"Lessons" is another 'bottle' episode, using just the one main guest star and a simple additional set (the Enterprise's stellar cartography room) in order to save money on more ambitious episodes elsewhere. At first it seems it is going to be a fairly sedate and underwhelming episode, but as it develops "Lessons" is actually a rather wonderful epilogue to "The Inner Light".

"The Inner Light", broadcast about a year prior to this episode, saw Captain Picard experience a surreal virtual reality experience where an ancient alien probe inserted the memories of an entire life - with a wife, children and grandchildren - in his mind. He experienced decades of life on the planet Kataan, while the Enterprise crew attempting to revive his unconscious body only experienced 25 minutes. By the episode's end all he had from his experience was a small flute left behind inside the probe.

"Lessons" connects Daren and Picard via a mutual love for music. She plays the piano, he the flute, and by growing closer to someone on that basis Picard is finally able to confide his experiences on Kataan and the overwhelming emotional attachment he has to the flute as a result. It always felt like an oversight on The Next Generation's part to leave Picard's Kataanian experience unresolved; he got an entire episode to begin recovering from his abduction by the Borg ("Family"), and "The Inner Light" always struck me as a pretty traumatic thing to live through as well. This episode feels a bit late as a result, but as always: better late than never.

Guest star Wendy Hughes is probably a more famous actor to Australian viewers than American ones. A major figure in 1970s and 1980s Australian film, she had previously appeared in Newsfront, My Brilliant Career, Careful He Might Hear You and others. She is a perfect match for Patrick Stewart, presenting a strong-willed, intelligent and more mature sort of a character than Picard's previous love interest Vash (Jennifer Hetrick). Together Hughes and Stewart build a very believable love affair, and while the episode has its problems their performances certainly aren't among them.

To be honest the main problem is the episode's climax. Picard sends Daren on an away mission that appears to fail, and for some time appears to have resulted in her death. When she survives, she and Picard realise he cannot be in a relationship with her while also being her commanding officer, and go their separate ways. It feels like a blunt and poorly motivated excuse to press the much-ridiculous 'reset button'. What is more, the episode's limited budget restricts the away mission to the standard 'Planet Hell' soundstage and a few visual effects. A more open-ended, less actively dramatic conclusion would have suited the rest of the episode better, and provided more story material for the future.

All up, "Lessons" remains an unexpectedly effective episode. It's the 13th good episode out of 19 so far. That gives Season 6 a cumulative quality ratio of 68 per cent.
Posted by Grant at 9:52 AM