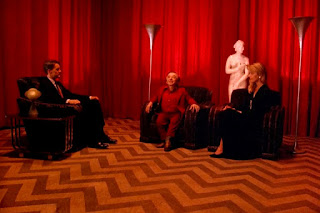 It is 19 April 1990, and time for the second regular episode of Twin Peaks.

FBI agent Dale Cooper (Kyle MacLachlan) employs a bizarre method of investigation to get a clue as to Laura Palmer's killer. A mysterious one-armed man is seen lurking in the hospital where the killer's other intended victim has been admitted. FBI forensics expert Albert Rosenfield (Miguel Ferrer) arrives to review evidence. Laura's father Leland (Ray Wise) grows emotionally unstable. Cooper has the strangest of dreams.

This is pretty much the make-or-break episode of Twin Peaks. Get through it with a smile on your face and you will know this is a television series for you. Come out frustrated, annoyed, or even bored out of your mind, and I honestly think you can move on and never watch the show again. With Episode 2 the series dives full-Lynch into some remarkably odd territory - and it only gets weirder as the episode goes on. It is probably easiest to run through the episode in order from the most normal to the most inexplicable.

Let's start with an easy one: Miguel Ferrer arrives as FBI forensic scientist Albert Rosenfield. He is immediately and deliciously offensive, insulting the town, the landscape, the local police and particularly Sheriff Truman. Ferrer, who sadly passed away last year, was a master at these kinds of arrogant, immediately unlikeable characters. He is great here, and provides some new information on Laura Palmer's murder.

Benjamin Horne (Richard Beymer) is having dinner with the family - blink and you'll miss his wife Sylvia (Jan D'Arcy) who does not appear again until the Season 2 finale - when he is interrupted by his younger brother Jerry (David Patrick Kelly). Yes, it is true: the Hornes named their sons Ben and Jerry. Jerry is clearly the disreputable failure brother in the family, and is obsessed with eating baguettes containing nothing but butter and brie. The sight of Ben and Jerry in ecstasy eating cheese-filled bread rolls is what opens this episode, and Lynch spends what seems like an overly generous amount of time on it. It becomes a delight to watch: the Horne brothers adore their butter and brie sandwiches so much that it's infectious.

Bobby (Dana Ashbrook) and Mike (Gary Hershberger) go to drop off their half of the drug money for Leo, only to be confronted by Leo (Eric Da Rae) when they do. It's a weird scene, mainly because Da Rae is acting out every cliche imaginable in what feels like a master class of bad acting. It is so weirdly awful - particularly when paired with Ashbrook's enthused over-acting - that I have to assume it was deliberate: Lynch and Frost's obsession with soap opera striking again. The soap opera angle is accentuated by the show-within-a-show Invitation to Love, which pops up regularly on people's television from here forwards.

Leland Palmer has a breakdown in his living room, furiously dancing with a framed photograph of Laura until his panicked wife tries to intervene. He collapses in a sobbing heap, breaking the frame, cutting himself, and then smearing his own blood all over the photograph. It is another one of those awkward, uncertain scenes where you cannot be sure if it is intended as comedy or tragedy. It is interesting that, while the series focused on Sarah Palmer (Grace Zabriskie) failing to cope in the pilot and first episode, it is now Leland who is portrayed having serious emotional struggles.

Agent Cooper introduces a new method of narrowing down suspects, which employs Tibetan philosophy, his dreams, a bucket of rocks and a glass bottle. It is charmingly ridiculous nonsense, and what makes it work is how the Twin Peaks police department are so patiently open to supporting Cooper's process. Kyle MacLachlan's upbeat, enthused portrayal of Cooper is really what makes the series sing for me. He presents such a sharp contrast to the serial killing investigation with which he has been tasked.

We get our first proper exposure to Nadine (Wendy Robie), the deranged and unstable wife of Ed (Everett McGill). She is furiously obsessed with developing silent curtain rails. Ed accidentally drips grease onto a row of cotton balls and she goes berserk at him in a rage. Like Leland's breakdown that signature uncertainty is there. Should we laugh at Nadine? Should we feel sorry for her? Should we fear her? Lynch does not allow us to make a definitive choice.

When Audrey Horne (Sherilynn Fenn) goes to the town diner, she drops a quarter into the jukebox and it plays her theme tune from the series' musical score. It is a small moment, certainly, but it is worth noting if we are recounting just how weird this episode gets.

That night, when Cooper goes to bed, he has a dream. It is one of the weirdest sequences in the history of American television. He witnesses two strange men, Mike and Bob, who talk to him in strange riddles. They once lived together above a convenience store, and killed people. They had matching "fire walk with me" tattoos. Mike grew so tired of the killing that he cut off his own arm. Bob claims he will kill again, catching people with his "death bag". The thing is: both men have been seen before. Officer Hawk saw the one-armed man lurking around the town hospital while guarding Ronette Pulaski. Sarah Palmer glimpsed Bob in a vision at the foot of Laura's bed. This section of the dream is actually taken from a weird alternative cut of the series pilot, shot by Lynch so that it could be released as a self-contained TV movie in Europe.

From there Cooper wakes in a strange red room, where he meets Laura Palmer (Sheryl Lee) and a little person (Michael J. Anderson) who will become known in series lore as "the man from another place". The dream is set 25 years in the future - which may be worth remembering in a few weeks with the release of Season 3. The scene is shot in reverse, with both Lee and Anderson reciting their lines phonetically and backwards, and then played forwards. It creates an unsettling style of movement from the characters, and a deeply strange and disturbing cadence to their voices. Laura whispers into Cooper's ear just before he wakes. He immediately telephones Sheriff Truman to announce he knows who killed Laura Palmer. It's a hell of a cliffhanger.

More than that, it is a hell of a scene. It's almost completely inexplicable, and hugely self-indulgent, yet it is so boldly and marvellously weird that I would absolutely point to it as one of the finest scenes in American television history. It also pushes the series hard until a supernatural arena at which previous episodes had only hinted. It makes it a much more interesting show. It makes it seem like anything might be possible in future. It also works to free the series from the shackles of a straightforward murder mystery: it is clear we are not supposed to understand what is going on any more, but that we are simply asked to enjoy the ride.
Posted by Grant at 5:02 PM