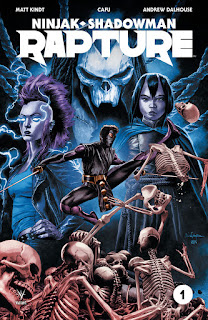 Valiant doesn't really do line-wide crossover miniseries like DC and Marvel, but they do regularly publish miniseries throwing multiple characters together for an adventure. Rapture presents a team-up between Ninjak, Shadowman and Tama the geomancer in the realm of Deadside, a creepy underworld filled with ghosts and demons.

Issue #1 pretty much sets up the story for the remaining three issues, and introduces the world of Deadside and its varied demonic inhabitants. Writer Matt Kindt has put a lot of creativity into this world, and the story benefits enormously by having this environment bedded down and explained before Ninjak and Shadowman enter it. Before they arrive the story is in the hands of Tama, a young girl with an enormous responsibility to see the approach of the end of the world. As written here she's very likeable and engaging.

Cafu's artwork is strong and Andrew Dalhouse's colours and wonderfully strong and rich. I am a huge fan of Dalhouse's work; he really makes his books pop off the page. You can pretty much always rely on Valiant to produce a solid and entertaining limited series, and Rapture is no exception. (4/5)

Under the cut: reviews of Batgirl, Rat Queens, Seven to Eternity and X-O Manowar.

It's time for the final showdown between Batgirl and Blacksun, aka Ethan Cobblepot - the resentful and brilliant tech genius son of the Penguin. This second story arc for Hope Larson's run shows an enormous improvement over the middling "Beyond Burnside" storyline. It returns Batgirl to Gotham's university suburb of Burnside and re-introduces the suppporting cast that made the previous volume of the comic so much more involving and entertaining. I mentioned Chris Wildgoose's wonderfully strong and distinctive artwork when reviewing the last issue, but it really does bear repeating. An exciting story, a neatly tied-up climax, and a new villain to potentially return in future. All up it's a great superhero comic. (4/5)

The Rat Queen's return to Palisades isn't going so well, since not only is there a rival group working their same missions there is also a team of cult hunters in town threatening to make life difficult. This is a great issue: the humour is hitting the right notes, Owen Gieni's artwork has settled in nicely and it really does feel like a ship has been righted. If anything this book feels even more comedic than it used to. with some funny segues and left-of-field moments really making a difference. (4/5)

Adam Osidis and the Mosak have no option in their journey to venture into a cursed swamp, risking death from the horrors inside than death at the hands of the Mud King's son who pursues them. This is a big issue, with high stakes and a game-changing choice made. I have gushed about Jerome Opena's exceptional artwork when reviewing previous issues, but it is worth pausing to appreciate what a well-developed and satisfying quest storyline that Rick Remember has written as well. The world-building is tremendous. This is an outstanding and must-read fantasy comic book. (5/5)

It's a double Valiant dose of Matt Kindt this week as he also writes the third issue of X-O Manowar. With Aric on an alien planet somewhere far away from Earth, and fighting someone else's pitched war as a slave, there is a lot to this relaunched book that reminds me of Greg Pak's outstanding "Planet Hulk" run for Marvel - and that's no bad thing. Sometimes the best thing you can do with a long-running character is throw them into an entirely new and challenging environment. This book is just stunning to look at, with rich heroic fantasy designs and a classical feel. There is even some valuable back story on the planet's ruling classes with guest artwork from David Mack. Three issues in, X-O Manowar is just stunning. (5/5)
Posted by Grant at 1:38 PM