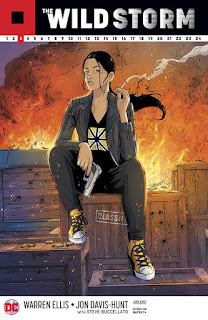 Angela Spica is tracked down by Jacob Marlowe's agents and invited to meet him. That conversation turns to hell when IO launch a 'Razor' team to kill everybody in the room. The third issue of The Wild Storm presents all-out action with some pretty gory consequences.

On the plus side, this issue certainly presents some exciting action, not to mention properly revealing some of the re-imagined WildCATS characters for the first time. There are also some very cute references to other DC properties in the book's opening scenes; it's nice to see a superhero universe aware of the concept of superhero universes.

Sadly it doesn't so much end as stop. There is something very odd about the plotting of this issue, which spends maybe a page or two too long on the main combat sequence. It leaves the book with no way to conclude. The final panel is basically a guy barking an order. It remains a great series, with strong tech-future writing by Ellis and nice artwork by Davis-Hunt, but the weak structure does knock a point off its score. It's great stuff, but this month it's not quite brilliant. (4/5)

Under the cut: reviews of Poe Dameron, The Power of the Dark Crystal, Star Trek/Green Lantern, Superman and Super Sons.

It is time for a showdown between Poe and First Order Agent Terex, while Poe's squadron fend off enemy fighters in orbit above them. It's a conclusion certainly, and is beat-by-beat satisfying enough, but it still does not feel like quite enough to solve the problem that this simply is not that interesting a comic. Darth Vader excelled because it used a much more interesting lead, and added a tremendous supporting cast - one so strong they now have their own monthly book. Poe Dameron does feel like it has that sort of support, and suffers because of it. If I was Marvel I'd quietly retire this book in favour of a more interesting set of characters. Also note that the cover to this issue lies: Captain Phasma does not appear. (3/5)

The Power of the Dark Crystal #2

It was inevitable that the second issue of The Power of the Dark Crystal would not have quite the emotional impact of the first: that issue was a beautiful shock to be reminded of just how wonderful the world of Jim Henson and Frank Oz's original feature was. This issue is more about plot development: bringing two new protagonists together, introducing an all-new and terrifying prophecy, and pushing the narrative forward to the very obvious inciting incident (someone cracks the crystal again). It is excellent stuff, and clearly produced with a great amount of love for the film. If you're a fan, this is an absolute must-read. New protagonist Thurma, for example, feels like a spot-on Jim Henson-style character. (4/5)

Don't get me wrong: this has been a dreadful series, driving forcibly up the continuity of both franchises until the comic is nothing outside of self-referential and deeply silly nonsense. That said, it manages to hit some unexpectedly effective story beats and climactic moments in its fifth issue. It is nowhere near good enough to make up for the earlier instalments, but if you have laboured this far it is nice to know there are at least a few rewards for your belligerence. Hopefully the next issue will be the last for the entire Green Lantern/Star Trek concept. (2/5)

A lot of story threads from the past 20 issues seem to be coming together at once. Batman is missing. The giant alien squid from issue #2 has inexplicably returned. Lois and Clark's neighbour Branden Cobb and his granddaughter Kathy are suddenly looking a lot more ominous than anyone had realised. Some of the more recent issues of Superman have felt a little underwhelming, but this issue really lifts them all up in retrospect. I am also slightly suspicious of the purple alien squid though, as I suspect many other Watchmen readers might be. (4/5)

It's Jonathan and Damian versus a super-powered, insane survivor of Lex Luthor's Amazo virus in this third issue of Super Sons. Quality-wise it feels like a step down from the first two, but its core appeal certainly remains: Jonathan and Damian as 'frenemies', constantly bickering and in-fighting while trying to solve crimes and save the day. The two work as hilarious small exaggerations of their fathers, so Damian skews really grim and arrogant, while Jonathan skews wildly optimistic and trustworthy. It's a great combination. (3/5)
Posted by Grant at 9:01 AM