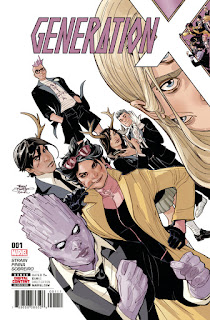 Marvel's revolving door of relaunches and re-numberings continues this week with Generation X #1, a new take on the popular 1990s X-Men spin-off. With Kitty Pryde taking over as head of the Charles Xavier School, a new group of young mutants all learn to control and apply their powers.

So there is a group of mutants to follow - some new, some pre-existing - and fan favourite Jubilee has been assigned to mentor them. This issue focuses solely on introducing them and leads to a cliffhanger ending for some action in issue #2. Plotwise it is nothing anybody has not seen before, and that is a bit of a problem. Marvel's sales are declining across the board, and offering up relatively generic X-Men titles are unlikely to help alleviate or even reverse that trend. The bottom line with Generation X is that there is nothing here to get returning readers excited and not enough introductory material to let new readers get in on the ground floor.

To its credit the artwork by Amilcar Pinna is nicely distinctive, and I particularly Felipe Sobreiro's relatively soft colours. It should also be noted that Christina Strain's script does not do anything specifically wrong, it just fails to bring a fresh angle to the title. The so-called "House of Ideas" desperately needs some new good ones. (2/5)

Under the cut: reviews of Britannia, Star Wars and The Wicked + the Divine.

Britannia: We Who Are About to Die #2

Antonius Axia is a Roman investigator sent to learn more about the gladiatrix Achillia, and the role she plays in the mysterious curse afflicting the city. I love that Valiant is experimenting so much with the content and tone of its books: Britannia presents horror in Ancient Rome, which is a marvellous concept rich with detail and story potential. So far (this is the second miniseries) it has delivered remarkable dividends. Juan Jose Ryp's artwork is excellent, and details the fictional and real-life horrors of the Roman Empire. This feels like some of Peter Milligan's best work in years. (4/5)

In the second instalment of "The Screaming Citadel" Han, Leia and Sana head off to rescue Luke from the mysterious Queen of Ktath'atn, while Luke and Aphra share a high-stakes dinner with her. This issue feels less impactful that the first part. The plot does move forward, but there's nothing here to significantly surprise or shock. Salvador Larroca's artwork is striking and, while visibly photo-referenced, does an excellent job of reflecting that special "Star Wars" feel. I just hope that in the next part (over in Doctor Aphra) there is a big new development to keep the story rolling.(3/5)

In The Wicked + the Divine, a group of humans wake with superhuman powers every 90 years. They live with the identities and powers of gods for two years, and then die. While the main storyline is set in the present day, twice now writer Kieron Gillen has penned a one-shot flashback to show the Pantheon (as they are called) in previous generations. The first focused on the early 19th century; this second book focuses on 5th century Rome. It is beautifully illuminating, showing off relevance to the current events in the main book while also telling its own small story. Guest artist Andre Araujo does a tremendous job as well: I would be very happy to see more of his work in the future. This is a great expansion of an excellent comic series, and I hope we get a few more before the main title eventually wraps up. (4/5)
Posted by Grant at 7:53 AM