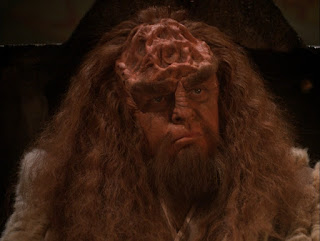 It is 17 May 1993 and time for another episode of Star Trek: The Next Generation.

Feeling dislocated from his Klingon beliefs, Lt Worf (Michael Dorn) travels to the planet Boreth where religious devotees await the prophesied return of Kahless: first Emperor of the Klingon Empire. Much to his shock Kahless does appear to return, leading to a fresh leadership crisis for the Empire.

"Rightful Heir" is a fairly remarkable episode of Star Trek: The Next Generation, and its most striking value is one that gets overlooked in the wake of spin-off series Deep Space Nine. That series spent a significant amount of time on theological issues, marking what seems like a sharp break from its predecessors. As those issues have become so firmly attached to Deep Space Nine within the broader Star Trek canon, it is easy to forget that "Rightful Heir" did it first. This is essentially the episode that brought religion to Star Trek.

It should come as no surprise that the episode's teleplay comes from Ronald D. Moore, to my mind the very best of Star Trek's 1990s writers. It was Moore who aggressively tackled the Klingon civilization through a string of episodes to give them their own distinctive culture, traditions and here their religion. It was Moore who developed some of the strongest elements in Deep Space Nine, and after leaving the franchise it was Moore who was showrunner on both Battlestar Galactica and Outlander. The man is a serious talent.

Not only does Moore solidify Klingon beliefs here, he simultaneously challenges them. Kahless has returned out of thin air, literally stepping into being in front of Worf's eyes in a Christ-like 'second coming'. Worf's religious beliefs demand that he believe in a miracle, but Worf also exists within a scientifically-based and firmly rational universe. He - and we the viewers - know that Kahless can not have returned, and that struggle between science and faith forms the emotional spine of the episode.

Worf's predicament contrasts with that of Chancelor Gowron (Robert O'Reilly), whose ruthless pragmatism leads him to view the returned Kahless as a threat to his own authority. O'Reilly always gives a wonderfully over-the-top performance as Gowron, and "Rightful Heir" is no exception. Kevin Conway is also very strong as Kahless, who ultimately must face a personal crisis of his own when he learns of his true origins.

Perhaps the episode's nicest and most unexpected scene comes where Worf, suffering a crisis of faith, winds up discussing his feelings with Data (Brent Spiner), who relates his own similar crisis early in his life. It is a perfectly composed scene, and beautifully performed by both actors, but most remarkable because of where Worf's comfort comes from: an emotionless android providing spiritual guidance to the series' most faith-based character.

This is a great episode, and much better than Worf's earlier Season 6 Klingon-based adventure ("Birthright"). We're now 23 episodes into Season 6, and this is the 15th good episode. The quality ratio rises to 65 per cent.
Posted by Grant at 5:14 PM