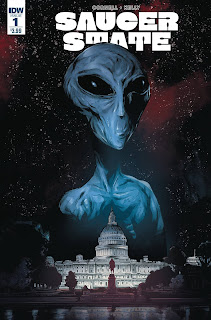 Arcadia Alvarado was Governor of New Mexico when she and her husband were abducted by aliens. Now she has been elected President of the United States, and struggles to determine what actually happened to her that night, and whether or not her own government knows about it.

Sound a bit familiar? If it does, it is possibly because back in 2012 and 2013 DC Vertigo published Saucer Country, a short-lived series by Paul Cornell and Ryan Kelly that blended elements of The West Wing and The X Files. Last week the series finally returned, shifting publishers from DC to IDW and with a change of title: Saucer State.

It is a little difficult to see how this new series is going to fare. For new readers this first issue dives in a little too hard and fast to make a huge amount of sense, and for old readers there is the question of just how many will pick the series up again after a four-year hiatus. Ryan Kelly's art has a nice energy to it, but Paul Cornell's script just feels as if it is covering too many bases at once. We are not reintroduced to the series so much as thrown in. It is ultimately a bit too messy to work with me, but hopefully in an issue or two things will settle down. (2/5)

Under the cut: an IDW special, with reviews of Ghostbusters 101, Highlander: The American Dream, and Star Trek: Boldly Go.

It has taken until issue #3, but the Ghostbusters of the 1984 and 2016 films finally meet each other. I was getting impatient with the first two issues, but this time around it is 100 per cent pay-off as the two casts interact, explain a bit more of the plot, and generally get a lot of jokes in. Rather predictably, Holtzmann is far and away the most enjoyable character: Burnham has really captured the tone of what Kate McKinnon achieved in last year's film. This isn't outstanding stuff, but for fans of the franchise it's certainly entertaining - and a nice cameo midway through the issue is a very pleasant addition. (3/5)

Immortals Connor MacLeod and Osta Vazilek hunt down the insane serial killer - and fellow immortal - John Hooke on the streets of 1955 New York. Brian Ruckley has really captured the tone of Highlander's characters, but he has also put them into a hugely inventive story. The pace is strong, and Andrea Mutti's artwork has a really pleasing sort of 1980s style to it. It all comes down to an outstanding cliffhanger: the fifth and final issue cannot come soon enough. (4/5)

The sequel comic to Star Trek Beyond continues. In a neat re-imagining of the classic episode "Journey to Babel", Kirk and his crew race to find a murder suspect before the Romulans - with whom the Federation are finally negotiating peace - take their chosen suspect back to Romulus with them. It's a neat, clean story, with clean and effective art and colours by Megan Levens and Sarah Sterns. As with Ghostbusters, it is unlikely to be of interest to anyone beyond pre-existing franchise enthusiasts, but it does an entertaining job of it. (3/5)
Posted by Grant at 9:11 AM