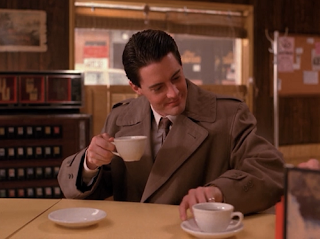 The only witness to the Laura Palmer murder may be a myna bird belonging to suspect Jacques Renault (Walter Olkewicz) - so long as it can be coaxed to talk. Leo Johnson (Eric Da Re) plans revenge on Shelley (Madchen Amick) and Bobby (Dana Ashbrook). James (James Marshall), Donna (Lara Flynn Boyle) and Maddie (Sheryl Lee) uncover tape recordings made by Laura to Dr Jacobi (Russ Tamblyn) - and hatch a scheme to get inside Jacobi's office to find evidence he killed her.

In this, the penultimate episode of Twin Peaks' first season, the plot threads are getting pulled together towards some loose sort of climax. We have one set of characters moving to determine whether or not Dr Jacobi is Laura's killer, and another doing the same thing with Canadian drug runner Jacques Renault and local thug Leo Johnson, and Audrey Horne (Sherilynn Fenn) doing her own independent investigation in parallel. It seems to be a common element of the series to run identical storylines at the same time. The series started with a string of simultaneous secret love affairs, and this episode also features Leo plotting against Bobby while Bobby plots against James while James plots against Dr Jacobi. It gives the series a weird sense of unity while it juggles its relatively unwieldy cast of characters.

Audrey Horne begins the episode crying in Agent Cooper's hotel room but soon rebounds to secretly snag an invite to work at the One-Eyed Jack's brothel. It's a wonderfully ridiculous moment to see Audrey hiding inside a closet, listening in on the department store manager recruiting one of her co-workers, and she is so relaxed about things that she lights up a cigarette while still inside the closet. Even once inside the brothel, being interviewed by its madame Blackie, Audrey remains confident and self-assured. Audrey's audition - tying a knot in a cherry stem inside her mouth - is likely one of Twin Peaks' most well-remembered moments. It is all utterly ridiculous from beginning to end, but Lynch and Frost have done such an exceptional job in building the series' surreal world that it's remarkably easy to just relax and go with it all.

The death of Waldo the myna is classic Twin Peaks: simultaneously absurd and horrifying. The idea that Jacques Renault's bird is going to somehow relate critical information is, in itself, very silly. Then its demise packs ever more into one ridiculous moment. The bird is shot by Leo using a rifle from outside the police station. Its blood is spattered over a tray of doughnuts. Its final words, recorded onto Agent Cooper's dictaphone: "Leo, no!" It is Twin Peaks condensed into a single frame: murder, Americana, knowing silliness and a deeply unsettling undercurrent.

After introducing Maddie, and then not really seeming to know what to do with her, the series finally has her impersonate Laura to coax Jacobi out of his office. It's a great move, not only because it visibly traumatises Jacobi but also because it leads to a wonderful moment of James reacting to Maddie-as-Laura and Donna noticing that reaction. One Jacobi is outside, James and Donna are free to search his office for evidence of murdering Laura - they don't find it, but they do find another tape and the missing half of Laura's heart necklace. It is a relief that, despite spending a lot of time being generally weird and random, Twin Peaks does keep its central mystery narrative ticking along.

At the episode's end things get unexpectedly ominous: Jacobi follows Maddie in the belief she is Laura, but someone - we do not see who - is secretly watching both of them.

There is a fantastic quirk to Twin Peaks that every time a television is on, it is playing the soap-inside-a-soap Invitation to Love. It does not matter if it's early morning, mid-afternoon or the middle of the night; if a television is playing, Invitation to Love is what it plays. It even gently echoes elements in Twin Peaks as it does. It is a wonderfully strange touch.
Posted by Grant at 1:13 PM