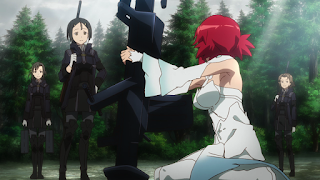 It is 29 October 2016, and time for the fifth episode of Izetta: The Last Witch.

Izetta is publicly revealed to the people of Eylstadt, an act that also reveals her existence to the Germanian military. Germanian agent Berkmann begins to develop a theory on how Izetta's powers may be limited - a theory he does not realise is very close to the truth. When Germania attacks a pass where Izetta's powers cannot function, her secretly is in danger of being revealed.

I was rather put off by Izetta: The Last Witch's fourth episode, which disrupted an otherwise hugely entertaining alternate historical fantasy with egregious and ridiculously tacky fan service. It soured the entire series to date for me, and left me reluctant to continue with watching it. In the end I decided to persevere. Thankfully this fifth episode is devoid of such unnecessary and intrusive titilation and returns instead to the series' strengths: action, World War II-inspired battles, and the inventive insertion of magic into an otherwise historical setting.

The return to Germanian agent Berkmann and his offsider Bisterfelt is a solid choice, revealing the goings-on of the enemy forces and their developing investigation into who Izetta is and of what she may be capable. Berkmann is a nicely manipulative and political operative, with huge potential to develop as the series goes on. Bisterfelt is essentially a sounding board for Berkmann, but it's a necessary role and he too shows potential to have his role expanded in the future.

Over in Eylstadt, there is an odd lack of character development. Plans are made, but no one really gets significantly developed. There is a neat little ruse where military intelligence effectively fake an attack by Izetta to mask her inability to actually fight at the relevant mountain pass, but to a large degree the episode feels like it belongs to the Germanians. Towards the end we do get a return appearance by the naive footsoldier Jonas, who accidentally overhears that Izetta has an actual weakness. Given we also learn there is a Germanian spy in the Elystadt army, this cannot end well for him.

This is not quite as strong an episode as Izetta at its best, but after the disastrous fourth episode it actually feels like a bit of a 'righting-of-the-ship'. How the next two or three episodes go will be key to how I feel about the series as a whole. For now, this instalment is good enough - the fourth good episode out of five - and that gives the series a quality ratio of 80 per cent.
Posted by Grant at 9:30 AM