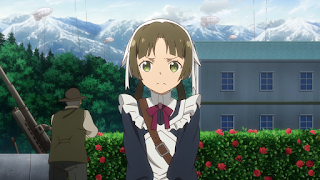 It is 5 November 2016, and time for the sixth episode of Izetta: The Last Witch.

With the latest battle won, and the Germanian forces retreating for the time being, Izetta and Fine manage to spend a day out among the common people of Eylstadt. Meanwhile Jonas knows Izetta's secret, and it's a race between a Germanian spy and Eylstadt spymaster Müller to get to him first.

After the previous episode of Izetta had thankfully avoided the egregious fan service that marred episode 4, "On a Quiet Day..." dives straight back in to the cesspit of leering cleavage and unnecessary and unpleasant sexual titillation. It is tremendously frustrating, because in every other respect this is a wonderfully entertaining series. These intrustions - and in this episode's case it is one early scene - have a tendency to sour whatever appeal the rest of the episode has.

The episode actually has quite a bit. The bulk is taken up with Fine and Izetta's 'Henry V among the troops' journey into town to eat pie, which is pleasant enough although oddly sedate given that there is a war going on across Europe. In a longer series there might be time for this sort of diversion, but with only 12 episodes in the whole series it does seem like a odd piece of filler.

More interesting is Jonas' knowledge of Izetta's inability to use her powers in certain geographical regions. Once cornered by the Germanian spy, he's fatally shot and threatened with his family being murdered. Jonas refuses to tell the spy anything, and at that moment Eylstadt agents shoot the spy stone dead. It's Müller who finds Jonas and, with his country's safety at stake, shoots the young soldier a second time to make certain he dies.

It's a shocking moment, but it is also tonally rather weird. The rest of the episode has been about getting shoved into corsets and eating pies, so to end it with a sudden and awful murder is a huge shift in emotional cadence. In a stronger episode it would be a remarkable moment, but framed by such a needless and sometimes insulting half-hour it just fails to work as well as it should.

The cleavage-obsessed scene of corset-fitting at the start soured the whole episode for me. It leaves Izetta: The Last Witch six episodes in - halfway - and with four decent episodes to show for it. The quality ratio slips to 67 per cent.
Posted by Grant at 9:03 AM