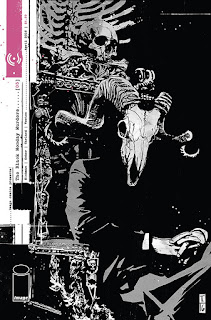 A police detective attempts to find his way into a world where money does not simply buy social power, but elemental powers over the fabric of reality. At the high table of the world's most richest elite, a young woman fights to control her legacy and avenge her brother's murder.

The Black Monday Murders is back after a brief hiatus, to kick off its second story arc. If you have ever read one of Jonathan Hickman's independent books you are well primed for what to expect: hugely complex and imaginatively world-building, inventive ideas, and a slightly avant-garde presentation that nudges at the periphery of what the comic book format can do.

Tomm Coker's artwork is moody and atmospheric, although to an extent it is occasionally a little too atmospheric - sometimes it takes a moment to recognise a particularly odd setting or action. It feels a minor criticism in the grand scheme of things: this is a great, ominous sort of urban horror that is slowly unfolding like a well-developed mystery. (4/5)

Magnus the Black has killed the Bishop of Oakenfort. Now there is only an entire walled town of his followers with whom to contend. This is a particularly strong issue of Black Road, not just acting as a climax to the entire arc but also fleshing out and revealing more of the Magnus' character. Garry Brown's artwork is very strong in this book, and it's interesting to compare his more exaggerated, muscular style here - which suits Magnus to a T - to his previous work with Brian Wood on The Massive. He's a wonderful artist. (4/5)

The first arc of Gerard Way's obsessive love letter to Grant Morrison's Doom Patrol run concludes here, with the reunion of the old Doom Patrol team with Crazy Jane. In many respects this feels like the Doom Patrol continuation that the Morrison fans probably wanted when he left the book, rather than Rachel Pollack's divisive (and deeply underrated) take on the franchise. For me the close, devoted re-making of Morrison's set-up is what is stopping this book from excelling. It's a pleasant imitation rather than a clever work in its own right. (3/5)

Harpies descend upon Ladycastle, which means only one solution: a tea party. I struggle a little with Ladycastle when it started; its heart was absolutely in the right place, but it felt a little too awkward and on-the-nose to work quite as well as it needed. Issue #3 feels much more self-assured and comfortable. The characters are a delight, and the constant cavalcade of monster attacks that get solved by unexpected and lateral means is getting funnier every time. This book has grown on me so much over just three issues. It seems a shame that it's ending with the fourth. (4/5)

A group of high schoolers team up to take down a local gangster. The small town youth focus, the crime, and Pius Pak's artwork style all make this feel rather reminiscent of 4 Kids Walk Into a Bank - which has been one of the best independent books of the past 12 months. I'm certainly not averse to this mini-genre of young crime stories expanding, particularly if they're as entertaining as this book here. Venhaus' dialogue in particular sparkles, and Bak's artwork is perfectly suited to the material. I had no idea what to expect when I started reading this book, and it's a wonderful surprise - I strongly recommend you check it out. (5/5)

Rebels: These Free and Independent States #2

In the late 18th century, John Abbott begins construction on the USS Constitution while America's political landscape spills out violently to the streets. Brian Wood is so good at writing these kinds of historical dramas, with a rich attention to detail and a very strong sense of place. Andrea Mutti's artwork is a great fit for the book too, presenting events and characters in a very simple, realistic style. I am particularly enjoying the characterisation of John Abbott, a young autistic man living in an age where such conditions are unknown to people. (4/5)

Lilly and her crew make a last-ditch effort to bring her face-to-face with Eva one final time - only to discover the full horror of Eva's plans. It has been quite a wait for this fourth issue of Satellite Falling (nine months, if we're counting), and as is always the case it does put quite a dent in the story's momentum. Thankfully it doesn't take long to get back into the swing of things, and the pretty awful revelations that come out regarding Eva's master plan and the truth behind her relationship with Lilly. All that and a hell of a cliffhanger. I really hope issue #5 doesn't take as long to arrive. (4/5)
Posted by Grant at 5:46 PM