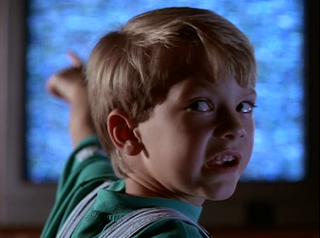 A teenage girl vanished from the shores of Lake Okobogee, Iowa, leading Mulder on the hunt for evidence of alien abduction. Scully is concerned, however, that Mulder's growing obsession with the case has less to do with the missing girl and more to do with his sister Samantha, abducted by aliens when he was a child.

So with the format and tone of the series firmly established, this fourth episode takes the time to better explore Fox Mulder's background and motivations for researching the X Files. It also does some remarkably good work in defying traditional genre stereotypes. Ask yourself this: two FBI agents investigate a crime. One is pragmatic and responsible, concerned with evidence and logic. The other is emotionally compromised and foolish, following their heart and their feelings at the expense of proper procedure and responsibility. Which agent would typically be the man, and which agent the woman? This episode may be focused on Mulder's backstory, but it continues to craft Dana Scully as one of the strongest female protagonists in American television.

There are also some great creepy moments throughout the TV. Young Kevin Morris writing strings of ones and zeros under the instruction of inaudible voices in his television set is a great conceit, riffing quite openly on Tobe Hooper's Poltergeist but managing to find its own wrinkle at the same time. The later revelation, that the numbers ultimately form the image of his missing sister, is a great visual moment in a series that's rapidly becoming full of them.

It's already clear, four episodes in, that The X Files is exceptionally good at visual storytelling. It has the images of a feature film, something quite common in the 21st century dominated by high profile cable dramas, but in 1993 - and on the Fox Network of all places - The X Files was pretty much the most cinematic thing on TV.

This episode isn't perfect, but it is still wonderfully effective. The final epilogue, featuring Mulder alone in a church while Scully listens to a recording of a hypnotic regression session is heartbreaking. This makes four good episodes in a row: no wonder this series grabbed my attention so violently 20 years ago.