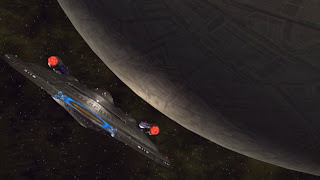 The Enterprise is critically damaged when it flies through a series of spacial anomalies. While Trip does his best to make repairs, the Enterprise is attacked by an alien vessel: pirates who prey on those ships that get damaged by the anomalies. After a successful raid takes badly-needed supplies from the Enterprise, Archer must convince his one prisoner to help him get the supplies back.

"Anomaly" is one of those episodes that is mostly entertaining, but which is almost scuttled by one glaring flaw. The flaw is this: Archer tortures a man to get the information he needs. He does it without any visible remorse and he does it without any subsequent mention of his actions by his crew. Lt Reed warns him that the prisoner is about to die, but he does not intervene. I get that Enterprise is a prequel series, and therefore the standard rules of the franchise don't necessarily have to apply, but first and foremost Star Trek is a utopia. The captain shouldn't be torturing people. A line got crossed here, and while it's not as bad as Captain Janeway committing premeditated murder in Star Trek: Voyager's "Tuvix", it does come dangerously close.

It's all a deep pity, because apart from the torture this is a really solid episode. The spacial anomalies are brilliantly realised and add more tension to the Enterprise's exploration of the Delphic Expanse. Robert Rusler, who played the late but not-so-lamented Lieutenant Keffer in Babylon 5, makes a good impression as Archer's prisoner Orgoth. I'm always impressed when an actor manages to emote convincingly under half a pound of latex prosthetics and he manages it well here.

There's also some good story arc work done here. The Enterprise gets a database from an old Xindi starship. Trip and T'Pol's growing romantic relationship gets addressed. As I mentioned above, the dangers of the Expanse get emphasised once again. There's also the revelation of a mysterious giant sphere - nineteen kilometres across - that appears to be responsible for generating some of the anomalies within the expanse. I get the feeling (well, more of a hope I suppose) this isn't going to be the only sphere they find in the Expanse.

All up this should be a fine episode, were it not for the torture damn near derailing the whole exercise. All up I'm giving it a tick of approval, but it's a weak and reluctant tick. The series really must do better than this. This leaves Season 3 with one good episode and one bad one: 50%.
Posted by Grant at 9:03 AM