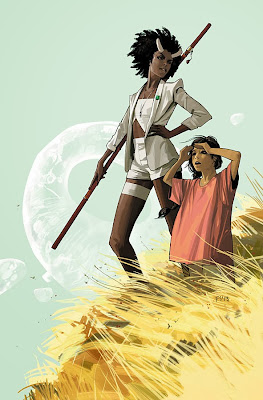 I was in the queue to buy comics this week, and I couldn't help but notice the young woman standing in front of me. She was holding both trade paperbacks (to date) of Brian K. Vaughn and Fiona Staples' Saga, and I overheard her explaining to the store clerk that she had read the first volume at a friends' house and was so entertained by it she had to buy the next volume - and a first volume of her own. I could be making an enormous assumption, but she didn't appear to have been in a comic store recently - or certainly not regularly.

Comic books used to be an enormous mainstream medium, with issues regularly selling in the vicinity of half a million copies. Now publishers celebrate when their books break 100,000. Marvel and DC both seem to be fighting a battle to the bottom - DC more so than Marvel - with an apparent aim to retain a gradually declining readership of 30something men rather than to break out and capture new readers in any significant fashion. Yet it's books like Saga that actually are making it happen. On paper it looks like it's selling okay but not brilliantly - issue #13 sold around the 55,000 mark - but that's just individual issue sales to comic shops. The trade paperbacks are selling like gangbusters, and the book is picking up awards left, right and centre.

How has it managed this when so many other comic books have not? Let's take issue #14 as an example. It's got stunning artwork by Fiona Staples, as always. Her art emphasizes the characters over the background, and that accentuates to us that this is a story about character over plot. Brian K. Vaughn writes outstanding dialogue, able to turn from drama to comedy on a dime. There are strong characters, both male and female, that we like and believe in. Each issue treats us with respect, and doesn't take our business for granted. Time and time again, and definitely in this week's issue, Saga is as close to damn-perfect as a comic book can get.

If DC and Marvel treated its characters with the care and respect that Vaughn and Staples show to theirs, we might have a few more broadly acclaimed comic books out there. They might be more popular. Comic books - or graphic novels at any rate - might become mainstream culture again. (5/5)

Saga is published by Image Comics. It is written by Brian K. Vaughn with art by Fiona Staples.

Another Villians Month issue that pushes the plot of Aquaman along a tiny little bit, but which overall doesn't really do or show anything to justify its existence. Now that we're in the fourth week I'm happy to call this special month an absolute disaster in creative terms - there seems to be a lot of online buzz about the lenticular covers, though, so I suspect sales will have been relatively good for DC. Good for them - doesn't make these books any more readable. Oh, and an implied gang rape in an Aquaman comic? Really, DC? (1/5)

All issues of Revival have been entertaining, with great writing and artwork. As is the case with all serialised fiction, however, some parts are going to be better than others. This is a really, really good part of the story. It pushes the overall plot along marvellously, it's got great moments of character, and it's boosted by more than one moment of superb horror: the creepy kind and the shocking physical find. One scene in particular is very confrontational, but then I believe good horror should confront. (5/5)

Ania and Jao go on the run from the Imperial Knights in a search for Darth Wredd. There's some lovely world-building going on here, as we slowly get a better understanding of what shape the galaxy is in for this far-future series (more than a century post-Return of the Jedi). There's also a nice bit of action, and an overall Star Wars vibe from the piece. It's still not as attention-grabbing as Dark Horse's main Star Wars monthly, but that book has advantages (the film cast) that this one doesn't. (3/5)

Michaelangelo watches too many zombie movies, then can't sleep, then discovers a zombie epidemic in the streets of New York. I really liked the first two issues of this comic because they captured the humour and tone of the TV cartoon wonderfully (and the current TV cartoon is a real thing of wonder). This issue completely fell flat, however, and I think it's due to the replacement writers. Scott and David Tipton also write the Doctor Who: Prisoners of Time series, and I'm finding they're a very hit-and-miss team. (2/5)

Spider-Man, Spider-Woman, Cloak, Dagger and some exploding girl I don't know and can't remember the name of team up to take down the Roxxon Corporation. This book has been slipping in my esteem over the past year. Some issues will knock the ball of the park, some will leave me wanting more. This issue just sort of sat there - it's a common sort of superhero fight, but doesn't really do anything I haven't seen many times in the past. The problem with a book like this is that it does something exceptional often enough that when it merely does something competently you feel short-changed. (3/5)

This issue is a tightly wound thriller, with edge-of-your-seat escapes and moments of great sci-fi horror. I am really enjoying this book, which has been a consistently great piece of commercial entertainment. I'll be amazed if I don't read of it being optioned for a movie adaptation before the final issue is published - it's that filmic. I really like Sean Murphy's artwork, which has a nice sort of frantic, sketchy style to it that really matches the panicky tone of the story. (4/5)

Like all of the Villain's Month books, this issue feels relatively redundant in that all it does is fill out some backstory. That said, it is entertainingly written and drawn backstory, and certainly one of the more enjoyable Villians Month issues I've read (although as you've possibly noticed I haven't really been reading many of them). While I'm enjoying this story arc, I'm not convinced that the Firstborn is the sort of memorable 'future classic' villain that Azzarello reportedly wants him to be. He's effective, but he lacks an iconic hook to make him great. (3/5)

I adore this book, whether it's the clever meta-textual way that the villainous "Mother" plucks captions off the page, or the fact that Loki is both the villain who kickstarted her entire scheme and the hero who is leading the charge to stop her. There's a nice Loki-esque logic to that, and as always Gillen writes it out with remarkable wit and depth. Jamie McKelvie's ultra-clean style will never stop impressing me: he gets so much life out of his characters' facial expressions. (4/5)