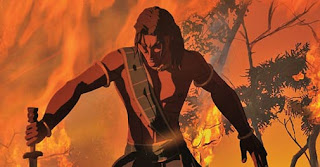 I wonder, then, what such naysayers would make of Arjun: The Warrior Prince. It's a Walt Disney Pictures animated film, but unless you're particularly geeky about the House of Mouse you probably haven't heard of it. It was paid for and distributed by Disney, but it was made in India. It is a Hindi language animated adventure film based in part of the Mahabharata, aimed at a family audience in India with no consideration given to whether or not audiences outside of the subcontinent will ever see it.

It's a surprisingly logical strategy, given that India is one of the most cinema-friendly audiences in the world. Arjun is clearly not the most expensive CGI movie ever made, but that lower budget means that it doesn't need to appeal to a global audience: one billion Indians is probably enough.

The film follows its titular prince from childhood through adolescence and exile, and into adulthood where he is gifted with a magical bow from Shiva with which to seek his revenge.

The film is animated in a cel-shaded style, so the look is somewhere between a traditionally animated cartoon and a computer-generated one. It gives the film a very clean, watchable look, albeit one that looks a lot like those videogames in the late 1990s such as Fear Effect) that used the same style. This technique does betray Arjun's lower budget: this is by no means on a par, visually speaking, with Walt Disney's core animated features. How much you enjoy the animation will ultimately depend on your own expectations.

The story itself is relatively engaging, although there is a small challenge in following it all without some prior knowledge of the mythology that informs it. Ultimately this is all reasonably entertaining stuff, with an extra layer of appeal provided through the sheer novelty of it. Disney goes Indian - who'd have thought it?
Posted by Grant at 1:03 PM