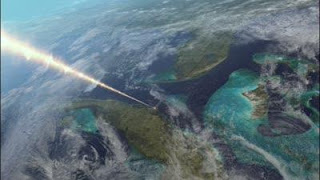 By 2003 it was clear to Paramount executives that Enterprise was not the smash hit they had hoped it would be. While the first season had premiered with more than 12 million viewers in the USA, by the end of its first year the series was attracting less than half that amount. By the end of the second season the viewing figures had dropped below four million and the series was at a serious risk of a premature cancellation. It was determined that a shake-up was required, and that shake-up begins here with "The Expanse", the final episode of Season 2.

An alien probe arrives in Earth's orbit and, without provocation, burns a mile-wide path across the planet's surface that runs from Florida down to Venezuela. Seven million people are dead, and the Enterprise is immediately summoned home to help find out what happened. En route, Archer is kidnapped once again by the Suliban and informed by their time-travelling overlord that the attack came from a species called the Xindi, who launched the offensive from their territory within the "Delphic Expanse". While members of the Enterprise crew come to terms with what has happened, Archer argues with his superiors to launch a counter-offensive.

"The Expanse" launches what will be a season-long story arc for Enterprise's third year, so as a result it's little more than a prologue. The Earth is attacked, the audience gets a pile of convenient exposition and by episode's end the Enterprise is sailing boldly into the unknown to prevent another devastating attack. As a result this is all a little hard to review: I enjoyed it, but it's not really much of an episode.

Parts of it are actively annoying: quite why Archer must learn of the Xindi by his temporal cold war enemies is beyond me - I assume there were concerns about dropping one story arc without trying to tie in the existing one, but given the half-hearted way the series had been pursuing the cold war I'm not sure anyone watching would have minded - or noticed.

There is another thread to this episode, which involves the disgraced Klingon captain Duras tracking the Enterprise to Earth's solar system in an attempt to destroy it in revenge for Archer's escape from Rura Penthe. After last week's bounty hunting episode I was actually quite glad to see this thread followed up on and, I assume, resolved for the time being. It was also a nice piece of filler to obscure the fact that, in terms of the core storyline, not a lot happens in this episode.

All up I did enjoy this episode, although as I said it does feel like less of a story and more of a primer for what's the come. Still, that gives Season 2 a total of 16 good episodes out of 26 - or 62%.
Posted by Grant at 10:24 PM