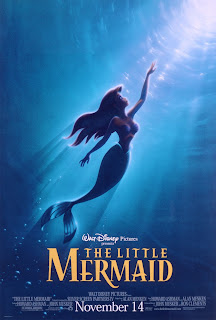 This week Walt Disney Pictures Australia release The Little Mermaid onto blu-ray for the first time. It's a beautiful transfer, with the best sound I've ever heard for this film and a crystal picture so clear you can see the individual pen strokes on the screen.

It's a film with a remarkably important place in Walt Disney history, as well as a lengthy journey from the first idea to its debut in cinemas. Walt Disney himself originally conceived the project as a follow-up to Snow White and the Seven Dwarfs in 1938 before choosing to adapt Carlo Collodi's Pinocchio instead. It bounced around the studio until it was revived in 1985 by animators Ron Clements and John Musker and pitched to studio head Michael Eisner. Eisner rejected their pitch, considering it too similar to the studio's live-action hit Splash, but animation studio boss Jeffrey Katzenberg encouraged Clements and Musker to keep developing their proposal. Their final 20-page treatment ultimately convinced Michael Eisner to go ahead with the film, which would act as Clements and Musker's follow-up to The Great Mouse Detective.

The Little Mermaid is based on the story by Hans Christian Andersen, however as the project developed it started to stray further and further from the original work. Most obviously, it was given a happy ending, but it also gained its own supporting cast and a much more prominent villain. The composer/lyricist team of Alan Menken and Howard Ashman had a big effect on the final film, changing the villain Ursula's appearance and transforming the English-accented butler crab Clarence into a Jamaican orchestra conductor named Sebastian. They also provide the film with one of the best combinations of score and song that Disney's animated features ever had.

This film was very much an end of an era: it was the last Disney animated feature to be coloured by hand, and the last to use the multiplane camera techniques first used all the way back in Pinocchio. From here-on-in, Disney would increasingly use computers and computer-generated animation. You can see this in the finished animation: in visual terms The Little Mermaid seems more like the end of a legacy that includes Cinderella, Sleeping Beauty and Alice in Wonderland than the start of a new age in Walt Disney animation.

It is, however, as the beginning of an era that The Little Mermaid is best remembered. It was the studio's first significant hit in more than a decade, and the first fairy tale adaptation in decades. Most importantly, it proved that Disney could still score a hit with audiences and heralded what is now known as "the Disney Renaissance". Films like Beauty and the Beast, The Lion King, Aladdin, Tarzan and Mulan all succeeded in cinemas because The Little Mermaid got there first.

It remains a wonderful film: fast-paced, breezy and beautifully animated. Ariel in particular is a wonderful creation, with numerous quirks and individual touches that bring her life far beyond what you'd normally expect from an animated heroine. Menken and Ashman's beautiful songs introduce a new contemporary Broadway style to Disney's films that continues to work well for the company. Put simply, this is a brilliant animated film re-released in a brilliant new edition.

There's a nice range of new special features, as well as a repackaging of all the special features included in the earlier DVD release. I particularly recommend a featurette on how the animators used live-action referencing to give the film a more cinematic look.
Posted by Grant at 11:18 AM