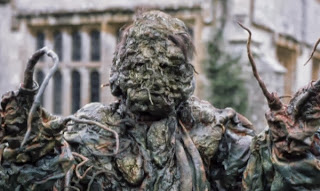 Who50 counts down to the 50th anniversary of Doctor Who by reviewing my favourite episodes and serials over the history of the programme, counting down from #50 to #1. Today, #5: "The Seeds of Doom", a 1976 serial written by Robert Banks Stewart and directed by Douglas Camfield.

One of Doctor Who's longest-running reputations is for being very scary for small children. There is an entire mystique built up around children hiding behind their sofa, or peeking out from behind cushions. I'm not sure if I was a particularly unusual child, but despite adoring Doctor Who from the age of three I never found it very scary. Except for "The Seeds of Doom", of course. "The Seeds of Doom" gave me nightmares.

This epic six-parter acted as the finale to Season 13, Tom Baker's second year as the Doctor. It is, in many ways, the archetypal Doctor Who story. It features the Doctor and Sarah-Jane Smith, it wallows in body horror (a staple of the series), it is in part a knowing pastiche, and it features an iconic, well-remembered monster. Its writer, Robert Banks Stewart, was one of the best writers of the period. Its director, Douglas Camfield, is pretty much the best director that Doctor Who ever had.

Body horror is such a common feature of Doctor Who. It's that idea that, instead of a monster turning up and killing you, you are somehow infected and become the monster yourself. Once transformed, you then set about killing all of your friends. It's a trope that crops up here, as well as in "Revelation of the Daleks", "Survival", "Ark in Space", "The Time of Angels", "Planet of Evil", "The Curse of Fenric" and many others. I think "The Seeds of Doom" is the most satisfying example of the trope, because you don't simply turn into a human-sized monster - you transform into the Krynoid, a rapidly growing carnivorous plant monster that starts human-sized but reaches the size of a football stadium. By my reckoning the Krynoid is still the third-largest Doctor Who monster of all time, after the evil sun in "The Rings of Akhaten" and Kroll in "The Power of Kroll".

It's all cribbed rather liberally from The Thing from Another World, of course, so much so that Stewart sets the first two episodes on an Antarctic research base. Doctor Who was always rather good as pastiche, and this is one of the best pastiches they ever did. It also breaks new ground in terms of six-part serials. A big problem in the Jon Pertwee era was that the pace of TV storytelling was increasing, and as a result few stories had enough meat to them to justify all six episodes - and dragged as a result. Banks Stewart avoids this problem (with the help of script editor Robert Holmes, no doubt), but splitting his six-parter into effectively two linked stories. There are two episodes running around in the snow, followed by four episodes hiding from a growing plant monster in an English manor house. It keeps the pace rattling along, and is a technique re-used to similar effect two years later in "The Invasion of Time" (basically two "invasion of Gallifrey" serials in a row).

Tom Baker is in his prime here, balancing gravitas and mockery. He's also rather uncharacteristically violent in this story, which I think helps increase the desperation of it all somehow. Elizabeth Sladen does a typically fine job as Sarah-Jane Smith. The guest cast is fantastic, notably Tony Beckley as the mad millionaire Harrison Chase but also John Challis as Scorby - Doctor Who's best-ever henchman - and Sylvia Coleridge as the artist Amelia Ducat.

This story is also the end of an era, as the Doctor calls on UNIT's assistance for the last time. Other than a brief cameo appearance in "The Five Doctors", UNIT won't be seen again for 13 years (until "Battlefield").

This is a series firing on all cylinders, doing no wrong, and creating the best horror-adventure television ever made for children. That's why, for me, it's one of the five best Doctor Who stories ever recorded.
Posted by Grant at 9:17 AM