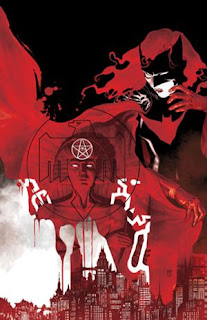 In the last week the creative team behind Batwoman, J.H. Williams III and W. Haden Blackman, resigned from that comic. They cited editorial interference as one of the two main reasons; not just editors leaning in and demanding changes, but demanding them at the last minute, often disrupting storylines that were already in-part published and distributed. They also cited DC editorial's refusal to allow them to marry series lead Kate Kane to her love interest Maggie Sawyer.

Putting aside the difficult question of whether DC is censoring its GLBT characters (DC insist the refusal to marry Kate and Maggie is purely because they don't think superheroes should be happy - I'm not making that up!), this is part of a continuing and unfortunate trend at DC Comics. They're losing a lot of momentum with their readers at the moment, and sooner rather than later they really need to adopt a policy of hiring good writers and artists for their titles, and to stand back and let them do their thing. This last-minute chopping and changing is just damaging their own business.

Under the cut: reviews of Aquaman, Batman, Federal Bureau of Physics, The Flash, The Manhattan Projects, Prophet, Star Wars, The True Lives of the Fabulous Killjoys and X-Men.

I'm not quite sure what DC are doing with the Forever Ever miniseries. This month every DC comic has been replaced with a one-shot focused on a villain; in this case, Aquaman's nemesis Black Manta. The thing is, some of them seem to be filler and fluff while others - like this one - seem to actually be quite relevant to the events of the miniseries. How are readers supposed to know which ones are critical to the reading experience and which ones are unnecessary? This is readable, and fleshes out a key moment from Forever Evil #1, but it's not exceptional. (3/5)

This is an outstanding little vignette that does a great job of presenting the Riddler for the New 52. He's a difficult character to write: sort of like the Joker if you're not paying attention (hello to Jim Carrey), but incredibly different if you are. A lot of writers seem to struggle with how to present his obsessive-compulsive need to litter clues around the place as to what his crime is going to be. Thankfully Snyder and Fawkes do a great job with that. My only criticism: someone gets their arm blown off. Really, DC? Really? What is it with you guys and dismembered limbs? (4/5)

This is the third issue for FBF, aka Collider, and the book seems to be settling down into a more coherent and gripping plot. FBP agents Adam and Jay are both trapped inside a shrinking bubble universe: Adam's doing his best to complete the mission, while Jay has treason in mind instead. I have vacillated on this book a little, but it really does all fall together here with some good scripting and solid, expressive artwork. At US$2.99 an issue, it's sensibly priced as well. (4/5)

While many of the Villains Month issues are pointless fluff, and others like Black Manta are must-reads for followers of Forever Evil, the two Flash spin-offs - last week's Grodd and this week's Reverse-Flash - are critical reading for anyone keeping up with The Flash. This issue is, for all intents and purposes, The Flash #24, following up on last month's shock reveal of the new Reverse-Flash's identity. It's great stuff, as Manapul and Buccellato's work has consistently proven itself to be. (4/5)

The Projects team get caught unawares by a military takeover of their operations, while Oppenheimer takes control of the Projects while losing his grip on himself. Where else are you going to read a comic featuring floating brains in robot suits, or Laika the Russian cosmonaut dog observing alien invasions? Or drunk Einstein and cannibal Oppenheimer? Nowhere else, that's where. This book continues to impress, although this does feel like one of those 'set-up' issues, where it's not fully satisfying on its own yet promises something great next time. (4/5)

Han Solo and Chewie are on the run across Coruscant from Boba Fett and Bossk. Luke and Wedge are trying to escape a Star Destroyer. Princess Leia has found a Republic cruiser among the wreckage of Alderaan. I'm on a Star Wars kick at the moment; I've just started playing the new Edge of the Empire role-playing game and recently re-watched all of the films. This book, then, is manna from heaven: Kelly draws solid likenesses of the movie cast, while Brian Wood writes a great serialised story that not only fits seamlessly between Star Wars and The Empire Strikes Back, it weaves in elements from the prequel trilogy at the same time. This is the best tie-in comic on the market right now - or should that be TIE-in? (4/5)

The True Live of the Fabulous Killjoys #4

I was concerned last month that the story of Killjoys wasn't moving forward fast enough to reach a conclusion by the end of issue #5. Now that I've read issue #4 I'm much more confident that it will make it across the line. The storyline continues to be split between the anonymous Girl out in the wasteland, and the robots Red and Blue desperately attempting to escape the city. It's the second storyline that's intrigued me more, however both are fantastic. The real star is Becky Cloonan's, whose constantly outstanding artwork makes everything she draws a must-read. (5/5)

Young Cyclops and young Jean go on the run from Westchester, leading the present-day and future X-Men on a desperate chase. I'm really enjoying this crossover on a scene-by-scene basis, however I do wonder where it's going. You would usually hope that by the third issue you'd have a better idea on what's going to happen. Given how burned I felt by the end of Age of Ultron, this is giving me more than a moment's pause. It's very enjoyable stuff, but it's leaving me just that little bit doubtful as well. (4/5)