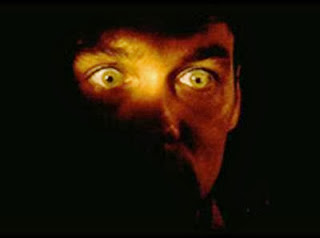 A former academy classmate of Scully's requests her assistance in a string of brutal murders in Baltimore, in which victims are found with their livers ripped out. Mulder comes along for the ride, tying in a string of identical murders 30 years in the past, and 60 years, and even 90 years. Facing growing resentment and opposition from their peers, Mulder and Scully close in Eugene Victor Tooms, an unusual human being with a horrifying physical ability.

"Squeeze" marks what we might consider the opening trilogy of The X Files. The pilot established Mulder and Scully, the FBI's "X Files" program and the idea of alien abductions. "Deep Throat" established the government conspiracy story arc. As a follow-up "Squeeze" marks the first of the series' celebrated "Monster of the Week" episodes: stories about freakish creatures, monsters and mutants that generally stand alone but which provide some of The X Files' most memorable and iconic moments.

It's clever that the series establishes so much in its first three episodes, as this now leaves the series capable of doing pretty much anything in the ensuing seasons. The parameters of the series have been firmly set and to be honest no episode strains these boundaries until the sixth or seventh season; they don't need to, because the parameters Chris Carter and his writing team have established are remarkably broad.

The standout element of this episode is easily Doug Hutchinson's creepy, unnerving performance as Tooms, a century-old liver-eating mutant with the ability to stretch and contort his body through the tiniest of spaces. Hutchinson does an amazing job of being genuinely scary, and it's not a surprise that he is brought back by the end of the season for a second appearance. I think it's also important to acknowledge just how groundbreaking "Squeeze" was. American television in 1993 was never this graphic or horrifying. In 1993 America's most popular TV dramas were Murder She Wrote, Northern Exposure and Dr Quinn: Medicine Woman. "Squeeze" must have stood out by a country mile.

There's some great work by David Duchovny and Gillian Anderson here: only three episodes in and they're already selling the relationship perfectly. Anderson is initially the more impressive of the two because she's got a lot more to work with in the script. Duchovny does exceptionally well when you consider how two-dimensionally Mulder is written in a lot of these early episodes. It's a testament to his acting that you often don't notice.

That's three great episodes in a row: no wonder I was so excited by The X Files back in 1993.
Posted by Grant at 9:27 AM