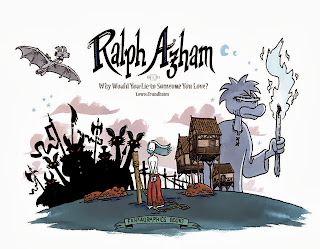 Lewis Trondheim is one of my favourite comic book creators, combining inventive wit, odd flights of fantasy and beautifully drawn anthropomorphic animals. In the English-speaking world he appears to be a writer/artist of some cult renown, however in France he's a megastar creator of some of the highest selling 'bande desinnees' in Europe. I first encountered his work via his long-running graphic novel series Dungeon (aka Le Donjon, co-written by fellow cartoonist and film director Joann Sfar), and soon expanding my reading to include McConey, Mr O, La Mouche and a more recent series of hilariously observed autobiographical strips.

Ralph Azham is the latest of Trondheim's works; a multi-volume fantasy epic about a rural village duck who may just be 'the chosen one' of myth. USA publisher Fantagraphics have published the first volume in a beautiful hardcover edition, while in France readers are already awaiting the recently completed sixth volume (due over there in January 2014). 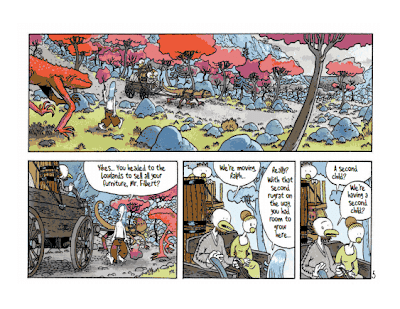 What makes Trondheim's work so appealing to me is the little touches: characters engage in what feels like oddly everyday behaviour and dialogue for what is supposed to be an epic fantasy. He also uses a surprisingly adolescent streak of humour that belies the expected tone of many scenes.


And here's the genius of the book: Trondheim eases you in with jokes about characters' sex lives, or getting soaked in animal poo, or generally embarrassing themselves, and then serves a blind-siding king-hit by the book's climax. Yes he's mostly a humorous creator, but the integrity he gives his characters also gives him remarkable freedom to turn on a dime and produce some genuinely effective dramatic moments.

I mentioned it briefly above, but it's really worth emphasising: this is a gorgeously packaged book, with thick matt paper, casebound and presented in an unusual landscape format that really allows the panels to pop off the page in a fresh way. Trondheim's colours are delicate and beautifully reproduced. Fantagraphics have a great eye for this kind of presentation - just look at their recent Disney books - and Ralph Azham does not disappoint in this regard.

Sadly you're unlikely to see this book on sale in many book chains or independent stores, and that's a shame because it's an outstanding work of graphic fiction. Order it in, head to Amazon, do whatever you have to do, but check out this book - and check out some of Trondheim's other works while you're at it. He really is one of the world's greats.
Posted by Grant at 12:56 PM