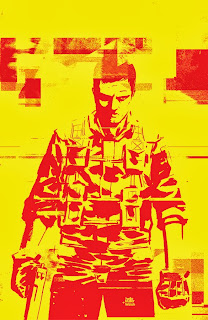 Ales Kot is rapidly becoming a writer to watch in American comics. His miniseries Changes was bizarre but engaging, and he's started dabbling in scripting some comics for DC and Marvel as well. Zero is his latest series; a near-future espionage book with artwork by Michael Walsh (Comeback). The first issue launched on Wednesday, so with a lot of hype behind this talented new writer I figured it was well worth a look.

The book follows Edward Zero, a secret agent sent into the field in Palestine to recover stolen biological technology from the body of a Palestinian terrorist - a terrorist that's currently still fighting in the streets against a super-powered Israeli soldier.

There's more than a hint of Warren Ellis about this book: it's certainly very bold and provocative, however it doesn't quite gel in the way that Ellis' work usually does. There's something a little juvenile about the book: the violence is ridiculously over-the-top, and it feels like Kot picked the Palestinian setting for no reason other than to be edgy and a bit controversial. Truth be told it could be set in any war zone on the planet and the story would still work. There's also a weird sex scene thrown into the issue that feels completely out of place and entirely gratuitous.

I suspect this will be a bigger success for Kot than Changes was: it's more commercial and a much less challenging read. On the other hand, it does appear to be giving us material we've seen many times before. I may check in on the book again down the road, but for now I have to be honest: Zero #1 didn't grab me.

Zero #1 is published by Image Comics, with writing by Ales Kot and art by Michael Walsh.

Under the cut: reviews of Batman, Daredevil, The Flash, Thor: God of Thunder, Uncanny X-Men and X-Men Legacy.

While the New 52's treatment of DC's characters has, by-and-large, been pretty rough, one character to benefit enormously from the reboot is the Penguin. He's previously been a humorous character or a slightly ridiculous straight mob boss, but over the past two years he's been marvelously transformed into a monstrous and ruthless villain who can actually be rather scary. Writers (particularly John Layman) have drawn quite a bit from Danny DeVito's performance of the character in 1992's Batman Returns, but thankfully he never becomes quite as grotesque as he did in that movie. This issue is a great character piece: largely self-contained, well written and nicely illustrated. (4/5)

A high-profile murder case appears to get hijacked by the Sons of the Serpent, who manage to cut into television broadcasts to frame the prosecuting attorney and leak the names and addresses of the jury to New York City. As the city descends into mob violence, Daredevil races to protect the prosecutor - and to find out who within the Serpent organisation is causing such mayhem. There's not much to say about this issue other than it's business as usual: great plot and dialogue, wonderfully engaging artwork, a great cliffhanger ending and everything else that you've come to expect from Marvel's most consistently brilliant comic book. (5/5)

A question for DC editorial: if this issue is set before The Flash #23.1: Grodd, then why for heaven's sake are you publishing it two weeks after that book? Why on Earth didn't you simply swap their places in the publishing schedule? It's tiny, idiotic cock-ups like this that really begin to irritate. This is a fairly ordinary issue to be honest: it solidifies the New 52 Rogues of Keystone City I suppose, but it simply didn't feel very engaging. It also leads into yet another miniseries, in this case Forever Evil: Rogue's Revenge. (2/5)

I do appreciate how carefully Marvel tie their monthly comic books into their motion picture schedule. A few months back they relaunched Guardians of the Galaxy, with a movie adaptation due in 2014. Now Thor: God of Thunder resurrects Malekith the Accursed, just before the dark elf villain makes his movie debut in Thor: The Dark World at the end of the year. It's a fresh jumping-on point for new readers, after the year-long "Godkiller" arc, and is certainly highly entertaining. It doesn't feel quite as ambitious as the first 12 issues, but hopefully things will pick up and get more complicated in the coming months. (4/5)

This issue feels a bit too much like the last installment of "Battle for the Atom". Some X-Men debate whether or not to send the original versions of themselves back to their own time. Young Cyclops and Jean Grey panic a bit while trying to run away. As with the previous issues, it's got great dialogue and characterisation, great art, and is really beginning to drag. I think I'm going to have to accept that I'm not a fan of Bendis' decompressed storytelling style and avoid his miniseries and crossovers from now on. (3/5)

David Haller has a fist-fight with Cyclops. That's pretty much the one-sentence pitch for this issue, but that doesn't express (a) how well Spurrier writes Haller's internal monologue throughout the issue, or (b) how relevant this issue's conclusion is to the overall arc that he's been following since this book launched. It feels as if we're heading towards a climax on X-Men Legacy, and I wouldn't be surprised to read an announcement of its cancellation very soon. If this is indeed the case, it's been a remarkably entertaining ride. (4/5)