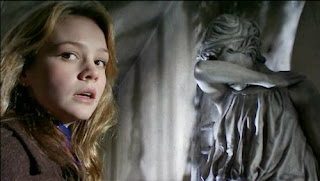 Who50 counts down to the 50th anniversary of Doctor Who by reviewing my favourite episodes and serials over the history of the programme, counting down from #50 to #1. Today, #6: "Blink", a 2007 episode written by Steven Moffat and directed by Hettie McDonald.

Amateur photographer Sally Sparrow enters an abandoned house in the search of images to capture, and instead finds a set of creepy stone statues and a message to her, hidden behind some wallpaper, from someone called the Doctor warning her about "the weeping angels". What follows is not only the most effective horror that Doctor Who has ever presented, but also the best-ever exploitation of time travel for narrative purposes in the history of science fiction television.

There are more emotionally engaging episodes of Doctor Who, and more effective ones as well, but in terms of sheer writing mechanics this is the greatest episode of all time: constructed like a clockwork machine in which every cog and gear has a purpose, and every movement ticks over in perfect precision.
What makes "Blink" so effective can basically be broken down into three parts. Firstly, there are the villains of the piece: the Weeping Angels. They are an immensely clever adaptation of the childrens' game Statues, and were originally created by Steven Moffat to use in his two-part story "Silence in the Library". When that two-parter was pushed back from Season 3 to Season 4, he took them out of their original context and put them here. They're absolutely brilliant, and while they've been popular enough to return twice to Doctor Who they were never anywhere near as effective and frightening as they are here.

The Angels' powers - to draw energy from your potential future life, and dropping you decades into the past as a side effect - create the foundation for the most complex time-travel episode in Who history. This would be the second part of why "Blink" is so accomplished: it's a televisual puzzle, in which every piece fits together perfectly with maddeningly apparent ease. The conversation between Sally and the Doctor, in which she's crouched over a laptop watching an assemblage of DVD easter eggs, and he's recording those easter eggs decades in the past using notes that Sally's best friend is writing in the background in the present - well, that's simply one of the cleverest things I've ever seen on television.

The third part, and perhaps the critical one, is Carey Mulligan's performance as Sally Sparrow. She's immediately engaging, and despite appearing for one episode she's one of the most memorable supporting characters ever. It's a deep shame she never became a proper companion down the road, but then Mulligan's skills rapidly brought her to Hollywood where she's probably earning a lot more money.

I also wanted to give big props to Hettie McDonald, Doctor Who's first female director since Sarah Hellings all the way back in 1985. It's very sad that this is the only episode of Doctor Who she has directed, because she does an incredibly good job of it.

This is the highest-ranked episode for David Tennant's 10th Doctor, and the highest-ranked episode of the post-2005 series as well. Tennant's Doctor featured in a large number of exceptional episodes, including "Human Nature" and "The Family of Blood" (ranked #11 by me), "Midnight" (#14), "The Impossible Planet" and "The Satan Pit" (#16), "The Girl in the Fireplace" (#17), "Silence in the Library" and "The Forest of the Dead" (#31) and "Army of Ghosts" and "Doomsday" (#45). That's a batting score beaten only by Tom Baker. Christopher Eccleston may have grabbed the British public's attention with his one glorious season as the Doctor, but it was David Tennant who made Doctor Who a national institution again.
Posted by Grant at 10:22 PM