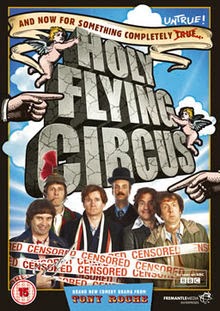 In 1979 the Monty Python comedy team - John Cleese, Graham Chapman, Eric Idle, Michael Palin, Terry Jones and Terry Gilliam - released their latest motion picture into British cinemas: Monty Python's Life of Brian. The film generated massive controversy, with 39 town councils across Britain banning the film from exhibition. So great was the furore that Cleese and Palin appeared on the late night talk show Friday Night Saturday Morning to debate the merits of their film with an Anglican Bishop and comedy writer Malcolm Muggeridge. The debate did not go as Cleese and Palin expected.

Holy Flying Circus is a 2011 made-for-television film, first broadcast on BBC4, that explores that debate and the events that led up to it. The film is written by Tony Roche, best known as co-writer of political satire The Thick of It, and directed by Owen Harris. It is a remarkable film, not because it's well written and well acted (and it is), but because the production team behind it have made the choice to tell the story of Monty Python in the style of Monty Python.

This is a strange TV movie: it engages in random flights of fancy, in-jokes, dream sequences, and animation. Fans of Python will have a field day with it, as on the most superficial level it's a celebration of their style of comedy. Thankfully it's more than just that, however, because underneath layer upon layer of deliberate satire and silliness there's actually a genuine and thoughtful drama about censorship, blasphemy and freedom of speech.

The film's core is based around Michael Palin and John Cleese. Darren Boyd plays Cleese as a broad caricature, but this seems in part to be a ruse because by the film's end Boyd has crept in and infiltrated a three-dimensional character that completely caught me off guard. Charles Edwards plays Palin in a far more nuanced fashion throughout, and he is effectively our protagonist. There are some beautiful moments for him throughout, particularly an unexpectedly long, silent take of Palin in the back of a taxi.

Perhaps the biggest highlight in the cast is Rufus Jones (no relation) as Terry Jones, as well as Palin's wife Helen Gibbons as if played by Terry Jones. There's something oddly beautiful about his performance as Terry-as-Helen; sure it's mainly there as a hilarious tribute to how the Pythons themselves used to play a lot of sketch characters in drag, but she's actually got an emotional arc at the same time.

This is a completely surprising film, and one that I strongly recommend.
Posted by Grant at 1:19 PM