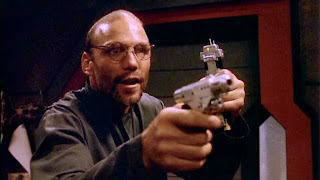 A string of bombings threaten the station. When one explodes near a docking port, Lennier saves Londo Mollari's life - only to be critically injured himself. When Sheridan orders for the perpetrator to be captured as soon as possible, Ivanova brings in some unusual assistance: a group of human monks relocating to the station in order to study alien religions.

"Convictions" is what I'm beginning to consider a fairly typical Babylon 5 episode: in broad strokes it's fairly tedious and full of cliche, but in the smaller details it's regularly quite well observed and entertaining. Certainly the central plot - a disaffected and mentally unhinged human contractor is running around setting off bombs - is entirely missable. There isn't a well-worn stereotype that isn't ticked off in this storyline, and it's further worsened by a ridiculously over-the-top and shriekingly painful performance by the actor playing the bomber. I'm amazed Sheridan doesn't just slap him in the side of his head, take away his trigger device and send him to his room.

There's an oddly annoying sequence at the start of the episode, where the religion of some aliens is pointlessly mocked, and Garibaldi shows himself to be quite aggressively insensitive to other cultures. I was also thrown by a tense meeting midway through the episode, where Sheridan and Ivanova meet with Londo in what can only be described as a garden chairs arrangement. I get that Babylon 5 didn't have the budget of Star Trek, but surely even Warner Bros could have found a couple of more convincing pieces of furniture?


As I mentioned, however, there are some nice touches. The group of monks wanting to move to the station to explore alien religions is actually handled remarkably well, and this is the sort of thing that usually makes me roll my eyes.

Also good are two scenes for Londo (Peter Jurasik). In the first, he talks alone to an unconscious Lennier, and the warmth of the character is given an opportunity to rear its head now that episode after episode has driven Londo into a very dark, ruthless place. In the second scene, Londo finds himself trapped inside an elevator with arch-rival G'Kar. Londo is terrified for his life; G'Kar can't stop laughing, because with smoke filtering into the lift from a recent explosion all he needs to do to see London die is to sit and wait. It's a disturbing scene, showing just how far down the rabbit hole these two characters have come. They don't have a fight, or a confrontation, or even a conversation: there's nothing left between them that can be said.

Despite these strong moments, overall "Convictions" is a fairly tiring experience. There's no harm in skipping it - in fact that would probably be my recommendation. Two episodes into the season, and one has been good: 50%. Not promising.
Posted by Grant at 7:41 AM