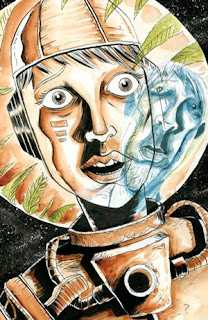 Last weekend Brian K. Vaughn and Fiona Staples' Saga was awarded the 2013 Hugo Award for Best Graphic Story. The graphic story category was introduced in 2009 to honour excellence in science fiction and fantasy in comic books and graphic novels, and over the past five years has been pretty roundly criticised by many (including myself) for the blinkered, non-representative choices made by the Hugo nominators. Some (again, including myself) have even been arguing that if the Hugo-voting community couldn't get its act together with recognising the best SF/F comics each year, it should probably drop the category completely rather than continuing embarrassing itself. Thankfully, in the case of 2013 I honestly think the best comic took home the prize.

So: assuming the Hugo voters are paying better attention these days, it's worth looking ahead to the 2014 Hugos and highlighting books that should probably be on the ballot by then. One example: Trillium, whose second issue drops this week. It's written and illustrated by Jeff Lemire in a beautiful abstract style that I have absolutely fallen in love with. It's also telling an intriguing story of hallucinogenic flowers, time travel, alien invasions and 1920s explorers. I'm not saying it should be guaranteed a slot in the Hugo nominations - we're only two issues in - but I am saying that if you're a person who generally nominates for the Hugo Awards, you should probably give Trillium a look. It's only two issues in and has been absolutely faultless. (5/5)

One last comment I would make about the 2013 Hugos: after the awards are announced, a full list of all nominated works are released, including the number of nominations each work received. When Carey and Gross' marvellous book The Unwritten didn't make the shortlist, I was surprised. It turns out that it received more than enough nominations to make the shortlist - had the organising committee not separated its nominations across two separate volumes and the comic in general. Poor form, Hugos. Poor form.

Is this the first time artist Andy Kubert has written a comic book? I'm trying to remember. If this is his debut it's a very strong one. This is a great self-contained one-shot set during the early years of the New 52 continuity, in which the Joker takes on a surprising new sidekick. The big surprise, and it comes early enough into the issue that I don't mind spoiling it, is the flashbacks to the Joker's childhood. They instinctively feel like they shouldn't work, because the character works best as an enigma - yet they work brilliantly. A strong start to DC's Villain's Month, which I remain unconvinced about. Sure, this book worked - but will all 52 of them? (4/5)

It's getting to the point where if Marvel publishes a comic book with Daredevil on the cover, you should probably just buy it. Dark Nights is a strange eight-part miniseries split into three unrelated serials. Issues 1-3 covered one fantastic storyline, this fourth issue begins another, as Matt Murdock's thrown into a race across New York after a miniature flea-like villain. David Lapham is telling a great, massively enjoyable storyline here, one in a long string of similarly excellent Daredevil storylines in recent years. (4/5)

This is exactly the sort of comic I was expecting to see as part of "Villain's Month". Paul Levitz is a great writer when he's firing on all cylinders, and fully engaged in what he's doing, but this DeSaad-based one-shot just feels like backstory and filler. Oddly, while it's technically an issue of Earth 2, it actually appears to have a lot more relevant to Worlds' Finest. Relevant, yes. Unnecessary? Also, sadly, yes. (2/5)

This is the other sort of comic I was expecting to see as part of "Villain's Month". This issue starts out as a follow-up to the "Gorilla Warfare" arc that ran some months ago in The Flash - that is, until it suddenly turns into a lead-in to a Forever Evil spin-off miniseries about the Rogues. It's difficult not to see this issue as nothing more than an extended advertisement. Again, it's relevant to the ongoing title, but it's also not a must-read by any sensible stretch. (2/5)

I promised myself I wouldn't reward DC for their irritating non-ending to "Trinity War". I promised myself not to buy into one more big publisher event miniseries. I promised. And yet somehow Forever Evil #1 found its way into the Pull List. Fool me once, shame on you - fool me twice, shame on me. All that said, this is a really strong first issue. It really drives home an apocalyptic feel: the Justice League have mysteriously vanished, and their evil doppelgangers have taken over the world. With the "big guns" gone - and one remaining hero receiving a pretty shocking character development - who can save the DC Universe? If you said "Lex Luthor", then you're probably going to enjoy this book. (4/5)

Recently I've fallen head over heels for Nickelodeon's Teenage Mutant Ninja Turtles cartoon. It's whip-smart, well-paced and laugh-out-loud funny, combining nice design aesthetics with straight-forward computer animated and a strong manga influence. IDW's tie-in comic is breezy, non-pretentious fun and does a marvellous job of copying the tone and content of the TV show. If you're looking for an enjoyable all-ages comic, this is a really good one. (4/5)

You remember that episode of Red Dwarf where they go back in time to before the ship was destroyed, and by the end of the episode there's a big scene in Lister and Rimmer's quarters with the Rimmer who's from the double-double future? This new X-Men crossover kind of feels like that.

There's a gleeful sense of play about all of this. The future X-Men are tantalizingly attractive, with one or two great surprises as to the line-up. What could be a continuity nightmare (there are now three simultaneous versions of some characters) is saved by some great dialogue and characterization, and an intriguing pair of cliffhangers. Like good gymnastics, the clincher for these kinds of big crossovers is the landing, but so far "Battle of the Atom" is good enough for me to agree to pick up the two or three comics I wouldn't normally read just to get the full story. (4/5)

Compared to all of the epic time-travelling shenanigans of "Battle of the Atom", X-Men Legacy feels more than a little short-changed. The son of Charles Xavier, the super-mutant David Haller, finally tracks down Cyclops to gain revenge for Charles' murder. This feels like Marvel should be treating it as a more epic confrontation that it is, but instead it's tucked away in a low-selling supporting book - this pretty much guarantees that nothing significant is ultimately going to happen. It's a pity: this continues to be an excellently written book with humour, drama and lots of off-the-wall concepts. I would give this issue five out of five, but it loses a point for some pretty skeezy lines about women. Stern look. Must try harder. (4/5)

Winner of the Week: There's no complete stand-out this week, just quite a few very enjoyable comics. If you're picking one to buy, go with The Joker.
Loser of the Week: Similarly there's nothing teeth-grindingly awful. The worst of this week's bunch is probably DeSaad to be honest.
Posted by Grant at 9:09 AM