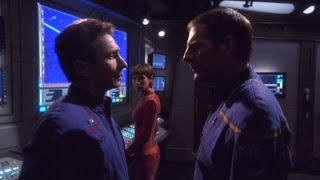 After six weeks of fruitlessly searching the Delphic Expanse, the crew of the Enterprise receive a tip from a freighter captain: a member of the elusive Xindi is a prisoner on a nearby mining planet. While Archer and Reed head planetside to negotiate for the prisoner's release, Dr Phlox attempts to convince Subcommander T'Pol to help Trip with his insomnia.

So begins the great re-imagining of Enterprise, now Star Trek: Enterprise just in case the reason viewers were turning away in droves was because they didn't realise that a science fiction series set on a spaceship called the Enterprise with a Vulcan on the ship and regular appearances by Klingons was actually Star Trek. Season 3 forms one big 26-episode story arc as the Enterprise searches the Delphic Expanse for the mysterious Xindi so as to prevent the destruction of the Earth at their hands. I really hope the arc improves on this first week, otherwise this is going to be a really long season.

The Enteprise now has a team of space marines on it, led by Major Hayes (Stephen Culp). I like Culp as an actor - I just wish he was in a more interesting role. There's not really a point to the marines (or MACOs as they're apparently called) other than to emphasise to the audience that 'this is really dangerous, so dangerous that even Starfleet's own well-trained security personnel aren't able to cope'. It's a bit silly, and to add insult to injury the script even has Lt Reed point this out.

T'Pol gets a makeover: new costume, new hair, both of which seem to aggressively feminise her against any previous representatives of her personality. The episode also takes the opportunity yet again to get T'Pol's shirt off. It leaves an unpleasant taste in the mouth. The writers (showrunners Rick Berman and Brannon Braga) also shoe-horn into the series a budding romance between T'Pol and Trip. I don't mind the idea at all, but it seems very abrupt and would have benefitted from a slower shift in romantic gears. As presented, I don't buy it.

The core plot of the episode, in which Archer and Reed are tricked by the mine owner and imprisoned alongside the Xindi they hoped to rescue, is very by-the-numbers and utterly disposable. All up, this is pretty much a throwaway episode seasoned with a few extra annoying and mildly offensive bits. That leads me to give "The Xindi" a 'no' vote. As I noted earlier, I really hope the season improves from here.
Posted by Grant at 8:27 PM